Are you in the market for one of the best gaming mice? Then, first off, it’s vital to know what that means. Because when you do most of your gaming in the confines of a particular genre, only a select few will work to your benefit. Gaming mice might be a specific subset of mice themselves, but they’re also fragmented into different genres.

If you want a gaming mouse for first-person shooters (fps), for instance, you’ll want to turn your head in the direction of the Asus ROG Gladius II. That’s because, unlike a mouse designed for MMOs and MOBAs, an fps mouse focuses on high sensitivity and low latency rather than amassing an assemblage of shortcut buttons knows as macros.

Luckily, even if everything we’ve said up to this point has been foreign to you, there’s hope yet. We’ve not only handpicked the best gaming mice you can find on the market, but we’ve done so with the aid of a mini-explainer guide below. So whether you’re a veteran or noobie gamer, you can expect to find your next gaming mice, along with sufficient context, below.

How to choose the best gaming mouse 2017

Although you’re bound to determine the best gaming mouse for you based on our rankings, doing so is no seamless task. There are a lot of complicated technical specifications that go into gaming mice, the bulk of which we hope to clear up here. In each of our review synopses featured on this list, we’ve highlighted both the DPI rating and the key facets of each mouse.

For newcomers to the world of PC gaming, DPI stands for “dots per inch.” It’s a term that deals with sensitivity, which most gamers typically seek a higher amount of. That’s because with a higher DPI comes greater precision and accuracy in your movements. Plus, if you’re working with a high resolution monitor, you’ll need a mouse that navigates more pixels per inch.

As far as features go, the best gaming mouse might offer an extensive lifespan, a high polling rate frequency for faster response times, RGB lighting and an ergonomic design. Some of the top gaming mice even boast macro keys that can be assigned to any in-game action. What works for you really just depends on how much cash you’re willing to part with.

The SteelSeries Sensei 310 is an unparalleled gaming mouse, both in price and performance. The low cost keeps it in line with what you would otherwise pay for a new, triple-A game release on Steam while its exclusive TrueMove 3 optical sensor, produced in collaboration with mouse sensor monopolist Pixart, makes it nigh-impossible to compete with. That’s because this mouse, with no preference when it comes to dexterity, exhibits some impressive real-world sensitivity results. What’s more, the jitter reduction component of the SteelSeries Sensei 310 aims to keep you from making erroneous moves after chugging an entire 2-liter of your preferred citrus-flavored soft drink. 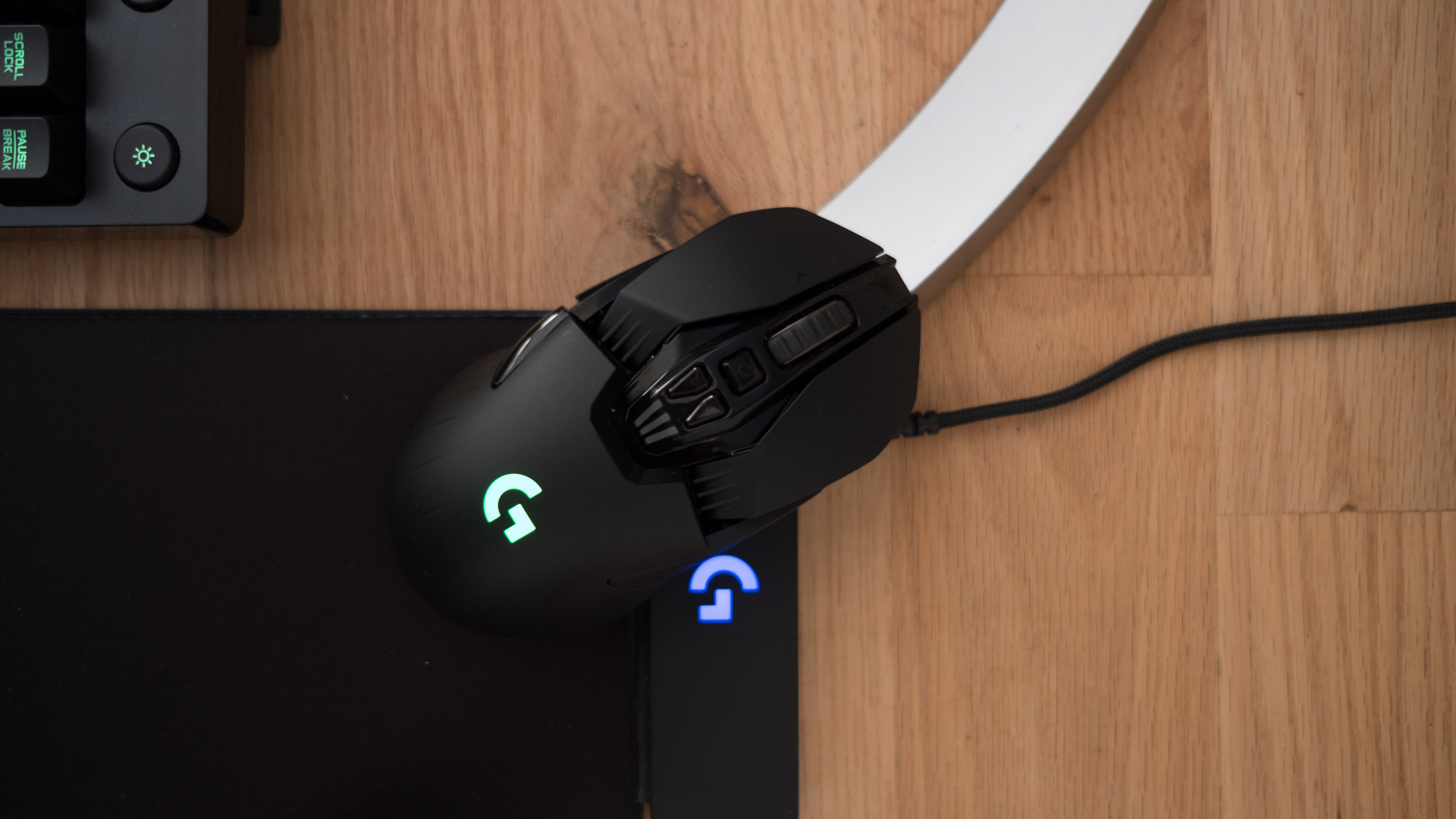 Undeterred by years of ridicule for their comparatively higher latency, the Logitech G900 of yesteryear proved once and for all that wireless gaming mice don’t have to suck. Though it’s merely a subtle iteration on that model, the Logitech G903 only reassures us of that conviction. Gracing a slightly altered G900 design with Logitech’s own PowerPlay mouse pad that doubles as a wireless charger, the Logitech G903 is an expensive, yet rewarding investment. On one hand, the cost might deter someone who wasn’t likely to buy it anyway, but on the other, you’re getting a high-DPI wireless gaming mouse that contends with even Razer’s best. 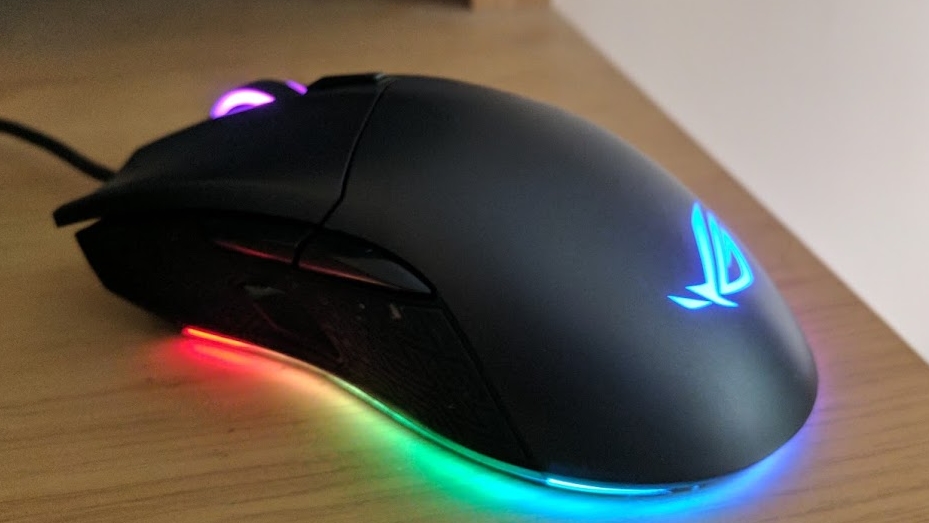 Flashy and desirable, there’s no confusion as to why the Asus ROG Gladius II is a bit pricier than other gaming mice in its class. Boasting swappable buttons, a clickable scroll wheel and a sensitivity toggle, this mouse has all the bits gamers crave. There’s even top-to-bottom RGB lighting for an extension of its already-handy customization. Although it doesn’t feature the swappable weights that many others in its price range do, everything else feels comfortable and up to snuff. Better suited for first-person shooters than MMOs, the high DPI rating and 50g acceleration make the Asus ROG Gladius a feat to behold despite lacking features in areas where cheaper mice have conquered. 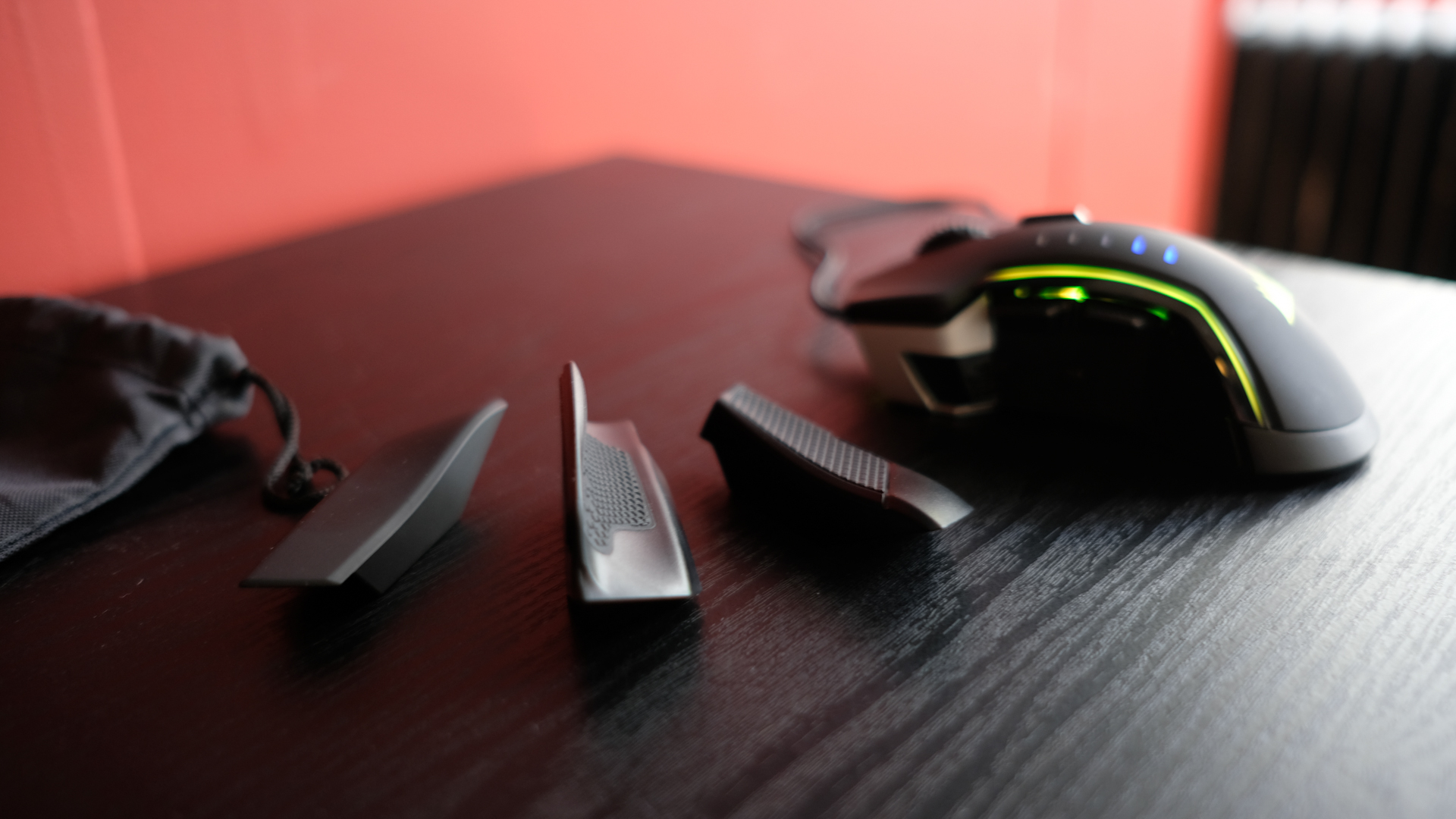 It’s obvious from the moment you look at the price tag that the Corsair Glaive RGB mouse was designed to go head to head with the Razer DeathAdder Elite. And while Corsair has had a ton of luck with its PC cases, keyboards, RAM, power supplies and cooling systems, a Corsair mouse is automatically a tough sell due to a lack of history alone. Luckily, the company’s latest gaming mouse effort is built for comfort, featuring a coating of soft touch paint and interchangeable thumb grips that augment ergonomics even further. At that point, the nearly perfect three-zone backlighting system and high-DPI Pixart sensor (not to mention the niftily included DPI status lights) are a mere bonus. 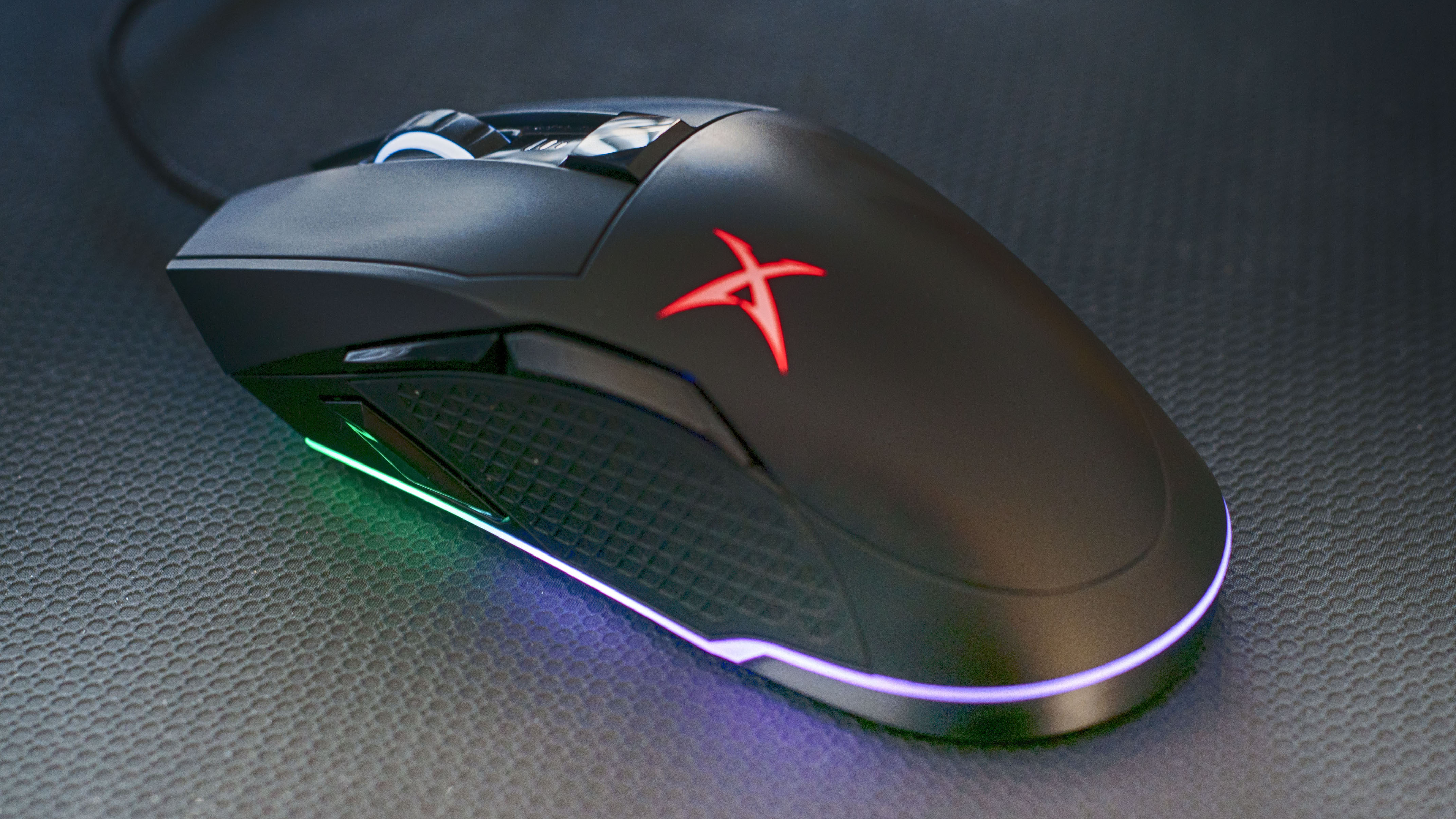 It’s not everyday that we see a company known for its sound cards try to take on companies as renowned as Razer and Logitech with a competent gaming mouse of its own. Creative’s Sound BlasterX M04 is exactly that, however, and it’s actually fairly impressive. The 12,000 DPI rating means you won’t need to use pointer acceleration to use the mouse successfully. The RGB lighting scheme, which is controlled using Creative’s own Sound Blaster Connect software, is displayed across a subtle accent at the base of the mouse. Clearly, the Sound BlasterX Siege M04 is a winner in both function and style. 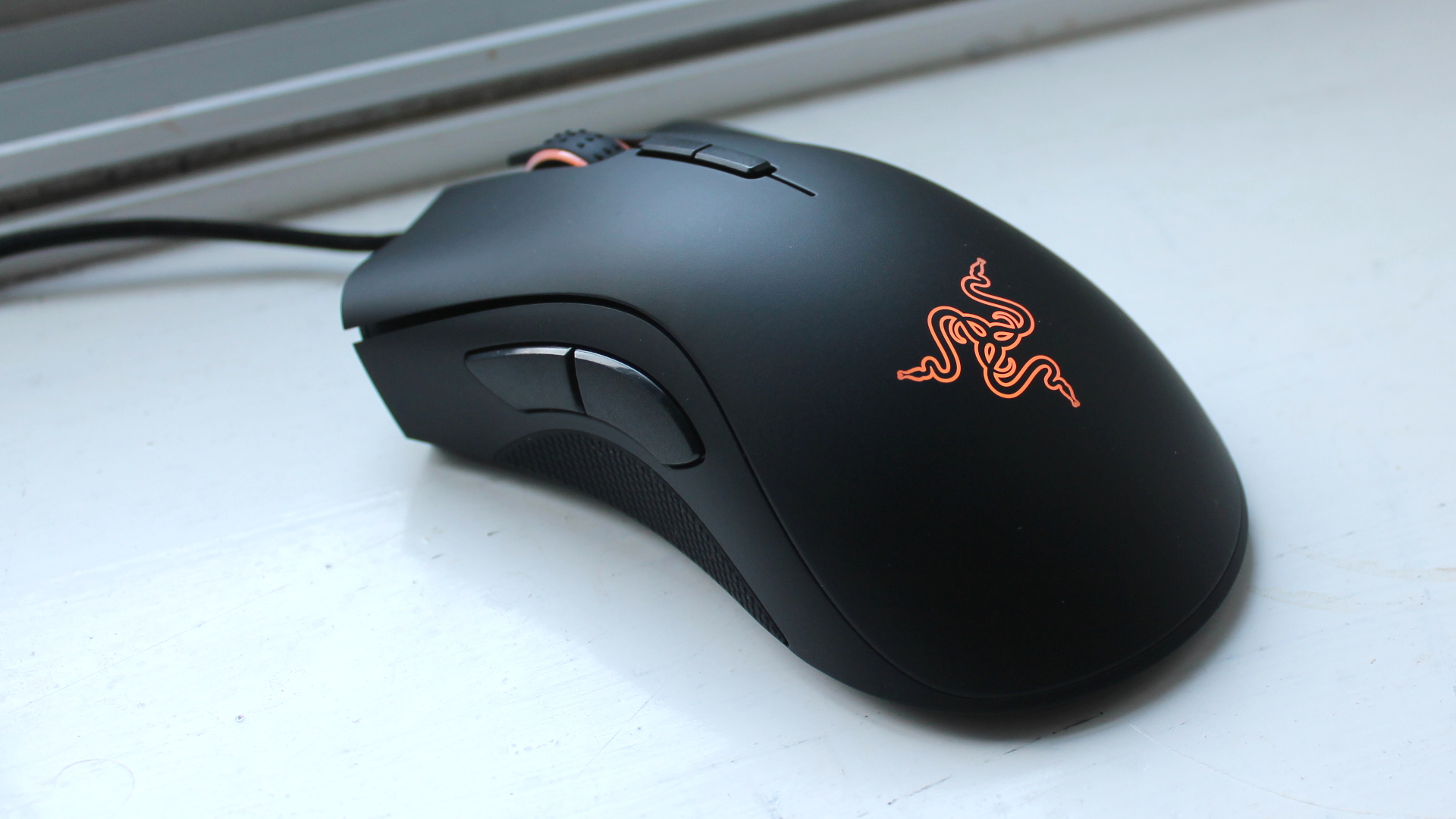 You know what you're getting with a Razer DeathAdder mouse, and this year's Elite model adds a new eSports-grade sensor and features the same right-handed ergonomic design as its predecessor that moulds into your hand, all while adding two new buttons beneath the mouse's scroll wheel to change DPI (or dots-per-inch) on-the-fly. While the DeathAdder Elite misses out on more advanced features such as the free-spinning scroll wheel that you'll find on Logitech's Proteus Core, the Razer's pretty RGB lighting (customizable lighting with 16.8 million color options through Razer's synapse software), big and accessible left-mounted buttons and grippable scroll wheel make it the best mice available in the price tier below. 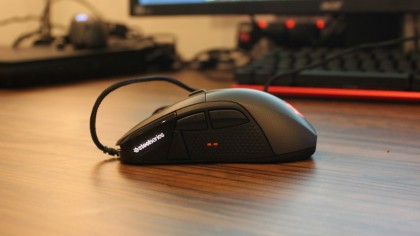 SteelSeries has ventured where few gaming mice have dared by adding a black-and-white OLED display to its Rival 700. Of course, you can’t just add a screen to something without implementing some sort of functionality. That’s why, in Dota 2, Counter Strike: Global Offensive and Minecraft, this rampant rodent can be used as a customizable tool to enhance your play sessions. In its less utilitarian form, it can also be used to display animated GIFs. Better yet, the Rival 700 hardware is modular, too, giving users the autonomy to snap covers on and off and even swap between a three- and six-foot USB cable. There are even tactile alerts in place, set to trigger vibrations when in-game resources are replenished. Overall, a distinct piece of tech. 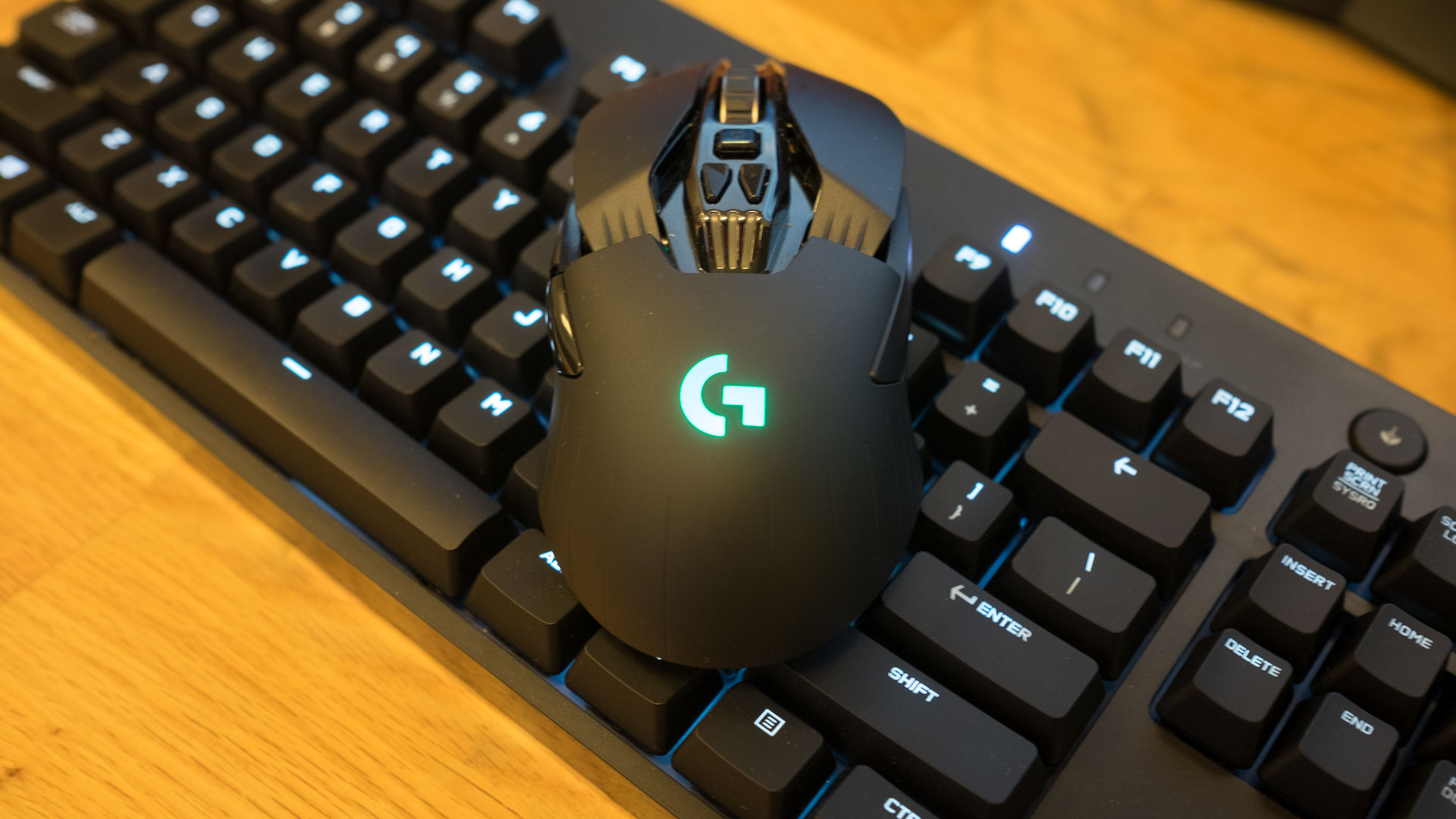 In recent years, wireless gaming mice have cultivated a rather adverse reputation, mainly in response to their perceptible lag. With the G900 Chaos Spectrum, however, Logitech seeks to change your mind. Using some form of wizardry, the company somehow managed to get its polling rate down to 1 millisecond on a 2.4GHz connection. Accompanied by accelerated coverage of the entire DPI range, zero smoothing and filtering, this gaming mouse is prepared for everything from your next game of Hearthstone to tournament level Heroes of the Storm. That goes without mentioning an ambidextrous design ideal for left-handed players in addition to a modular button layout. 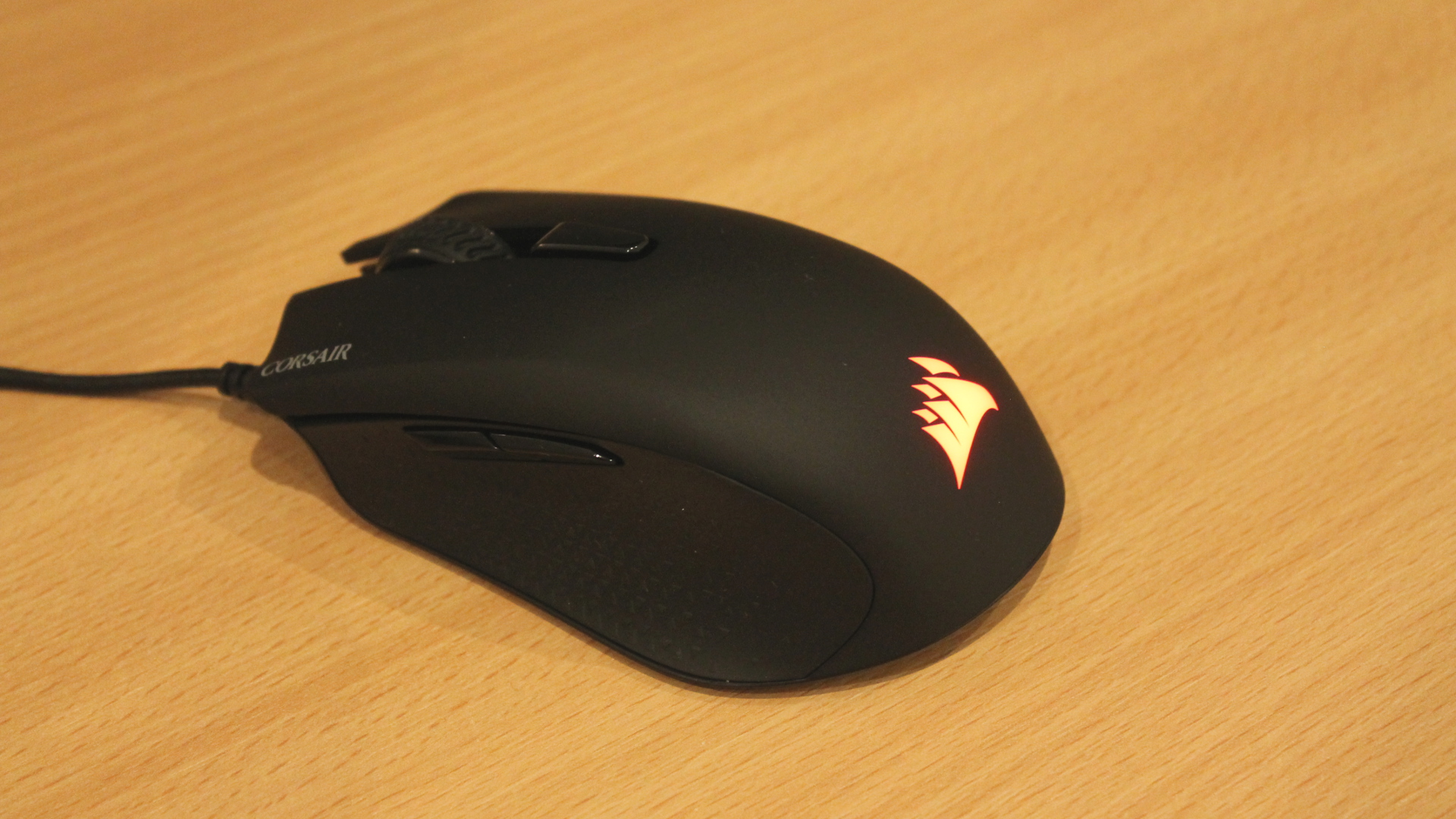 Featuring a grippable leather texture down the left-hand side, using the Corsair Harpoon is light slipping into a comfortable car with leather upholstery. Not a very expensive one, mind you, as the Harpoon is a budget offering that looks and feels cheaper than mice twice its price. Which is to be expected, of course, and with a snappy optical sensor and six programmable buttons including a center DPI switch and forward and back buttons on the side of the mouse, you have everything you need to game in any genre. Its average size makes it a good fit for both small and large hands, and Corsair's RGB-lit logo on the back makes it look rather cool when rested on your desk. 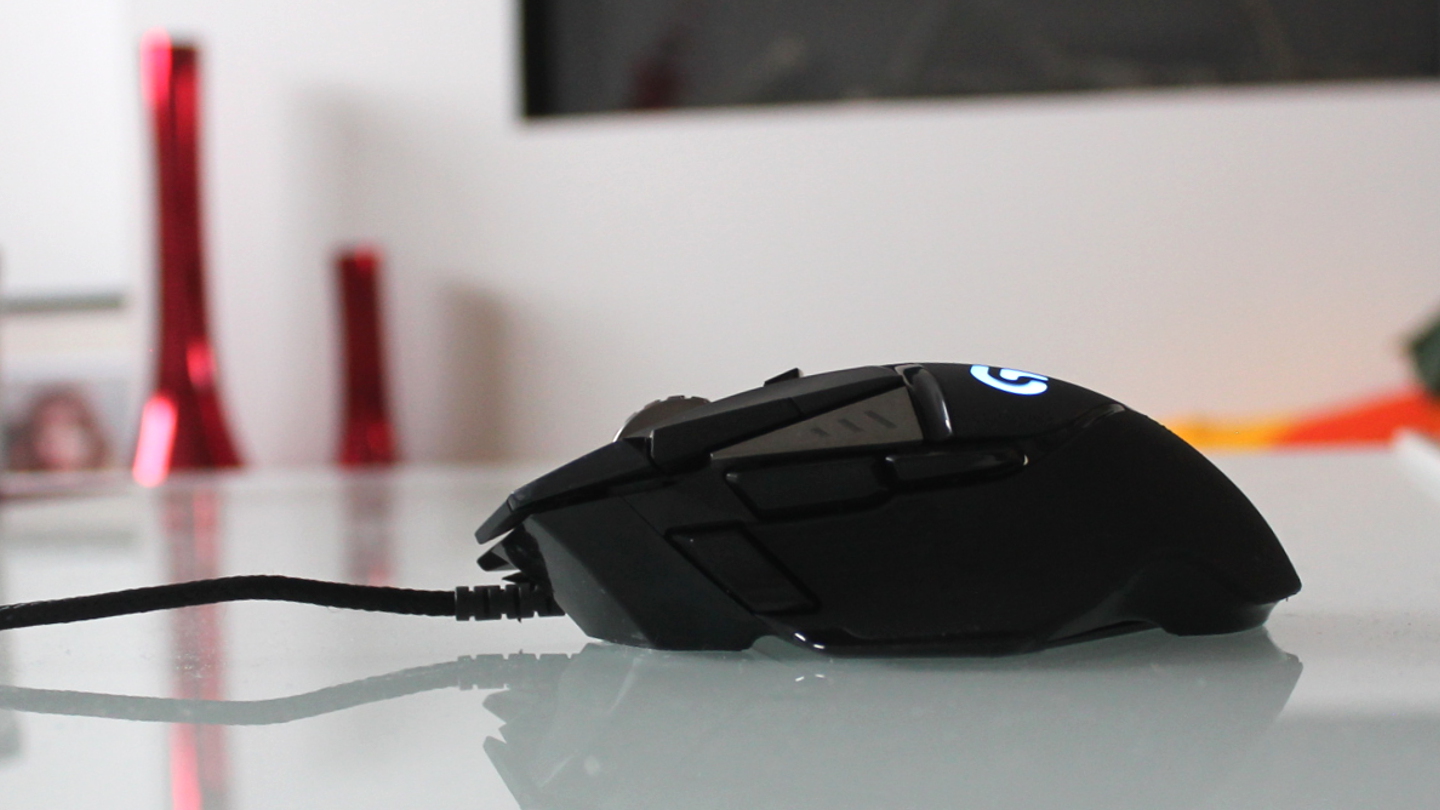 Logitech’s G502 Proteus Spectrum can be customized with up to six 3.6 gram weights, giving you a lighter or heavier mouse to wield, but it also packs surface-turnable gaming sensor packs Logitech's Delta Zero tech, which lets you use it on a wide variety of surfaces beyond your regular mouse mat. Clicking a middle mouse button lets the G502's scroll wheel spin freely, which helps prevent knuckle strain when navigating long webpages and forms. Add to that 11 customizable buttons including four on the left-hand side, a three-speed DPI shift under the scroll wheel and a logo that lights up 16.8 million colours in the dark using RGB backlighting, and you have one attractive, tech-stuffed gaming mouse.