Home Uncategorized Destiny 2: how to get the Legend of Acrius Exotic Arc shotgun – prepare yourself for a bit of work

Destiny 2: how to get the Legend of Acrius Exotic Arc shotgun – prepare yourself for a bit of work

The Legend of Acrius Exotic shotgun in Destiny 2 is a lovely Arc weapon, but the questline in order to acquire it is a bit of a humdinger.

If you are looking for a very powerful weapon, you will need to take part in the Leviathan raid in Destiny 2 more than once, not to mention you’ll need to complete other requirements before you’ll walk away with a full-powered Legend of Acrius Exotic shotgun.

Given that you’ll need to participate in the raid in order to bring the weapon up to max potential, you might want to give our Destiny 2 Leviathan raid guide a quick once over. It’s a rather detailed walkthrough, and also provides some tips on how to defeat Calus. It’s all part of the constant updates being made to our main Destiny 2 guide which provides a complete explanation of everything.

Before you can jump into the Leviathan raid, though you will need to pick up a quest in order to add the Legend of Acrius Exotic shotgun to your inventory. And there are more steps to take once you have completed the Leviathan raid if you wish to open up the weapon’s full potential. It’s never as simple has being gifted with a nice weapon for bringing down a boss sometimes, is it?

Before we get into how to acquire it, here’s what you need to know about the lovely arc shotgun which is one of 19 exotic weapons in Destiny 2, currently.

The Legend of Acrius has an interesting perk which fires blasts of high-damage Arc energy that over-penetrate targets. Basically, when you shoot an enemy, not only will they take heavy damage, the fella standing behind them will also take tons of damage.

In order to add the Legend of Acrius Exotic to your arsenal, you’ll first need to reach level 20 and pick up the On the Comms quest. Fighting Cabal in Adventures and World Quests is an easy way to get the quest as the On the Comms item drops from enemies.

Once the quest is picked up, you will need to head to Nessus and recover communication ciphers by defeating Cabal. Complete this and the On the Comms quest will change over to Await the World Eater. As Arekkz notes, since the Leviathan raid went live, step two of the quest is now called Destroyer of Worlds instead.

After completing the raid by killing Emperor Calus, the third step in the questline is unlocked. Called Imperial Invitation, you will need to head to the Tower to speak with raid vendor Benedict 99-40 to turn it in. The vendor will hand you the End the Arms Dealer quest which is a different version of the Arms Dealer Strike. 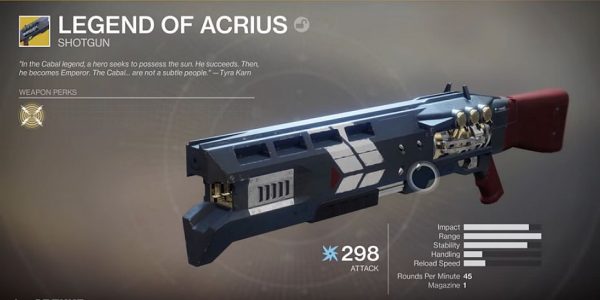 To enter the Strike, you will need to load into the European Dead Zone (EDZ), drop yourself at the Firebase Hades landing pad, and head toward the blue quest marker between this area and Legion’s Anchor on the map. This might be a good time to grab some scannable objects since you are in the area anyway. We have provided step-by-step instructions on all Destiny 2 scannable object locations in the EDZ should you need a bit of help.

Head back to the Tower and have another chat with Benedict 99-40. He will then give you another quest called Cabal Killer, and to complete the quest you will need to use Legend of Acrius to kill 25 Cabal, kill 15 Cabal at close range, and kill many Cabal without reloading Acrius ten times.

This one requires 100 Emperor Seals (these are different from Emperor Tokens) in order to complete and the seals can only be obtained by completing the Raid. Since the raid drops 74 seals upon completion, it means you will have to complete the raid twice.

At present, players will earn seals from completing certain actions. Opening a door will earn players five seals, opening a chest hands over 13 seals, and defeating the emperor will give out 15 seals. All combined, one raid pass should give you the aforementioned 74 seals.

However, at present the raid isn’t counting up exact numbers according to those who have finished it. Whether this is a bug or intentional Bungie’s part is unknown at this point, as some players feel the number is based on percentages. Some players have reported finishing the raid and the counter only showing nine instead of 74 seals, which means it could be a few weeks before anyone maxes out.

Again, this could be intentional due to the next step which will require the player to once again speak with Benedict after earning 100 seals so that he can send you back into the raid, forcing you to complete it on Prestige difficulty before he hands over the completed weapon.

Hard difficulty raids in tend to release few weeks after the standard level raid, so it could be a while before anyone gets hold of a Legend of Acrius Exotic shotgun in Destiny 2 that has reached its full potential.