Monolith’s sophomore visit to Middle-earth is a beast of two very different natures.

On the one hand, it’s a big budget fan-fiction that takes a heavy-handed approach to crafting a story in a lore that will always overshadow it. On the other, it’s one of the most engaging and enjoyable games we’ve ever swung a sword in. We love it and loathe it, but thankfully it’s for all the right reasons.

If you’re the kind of Tolkien purist that’s only just come to terms with how garbled Peter Jackson’s The Hobbit trilogy turned out, then you might want to sit down for these next few lines.

Thankfully, there’s a far more rewarding story to be found in SOW and that's the one that you pen as you explore the many regions of Sauron’s realm.

This is all down to the brilliant Nemesis System, which returns from Shadow of Mordor freshly updated and expanded in all the right places. In its original form, Mordor’s orcish population was a social hierarchy, a web of fate that ebbed and flowed on your every arrow and blade strike.

Revamped for Shadow of War, the Nemesis System and its occupants have evolved into an ecosystem that’s constantly reacting to your exploits. As before every orc has a unique name, appearance and set of attributes (all of which can be utilized in a fight, should you plan wisely enough).

However, now there are multiple rivals – assassin’s who attack out of nowhere (often as orcs you’ve already defeated) – and allies to be recruited.

The recruitment aspect brings a new edge that only served as a short term boon in Shadow of Mordor. Orcs can now be dominated and added to your growing army of allies. I encountered one captain who I fought time and time again before eventually besting him and forcing him to my cause.

I then made him my bodyguard and narrowly avoided death on many an occasion thanks to his intervention. It’s a wonderfully enthralling new dimension that’s utterly unique in its minutia to my specific playthrough. 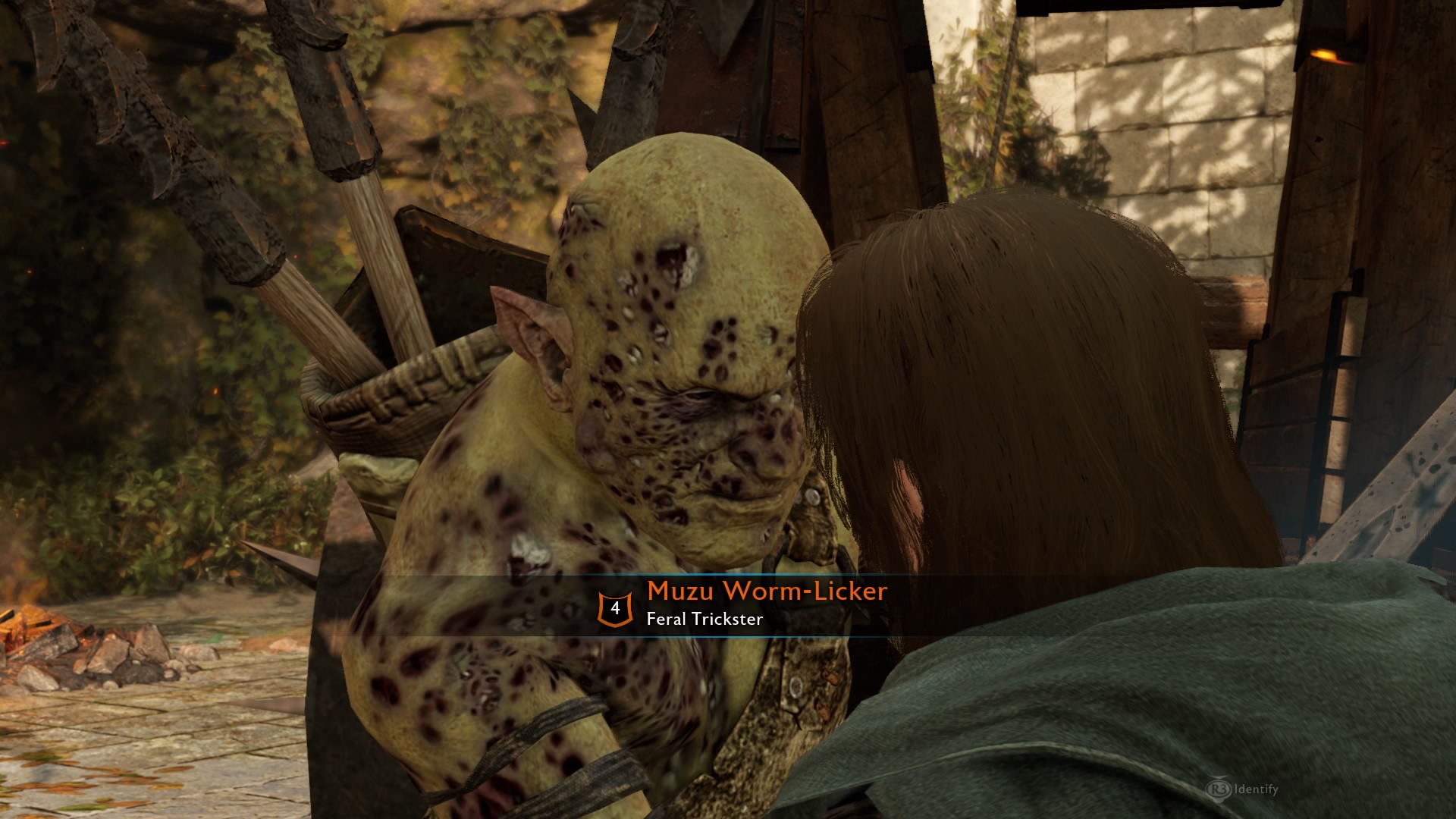 Shadow of War isn’t just about destabilizing Mordor’s movers and shakers; it’s a full on conflict as you build an army to finally take on Sauron and reshape Middle-earth in your image.

This conflict is the lifeblood of the game, and it’s one that elevates everything around it. The combat model is reminiscent of Batman Arkham an while it's not as creative as Rocksteady’s effort, it ultimately feels more satisfying thanks to its limb-chopping executions. It also feels more exciting because you know you could make a mistake at any moment and your resultant death will reshape the orc hierarchy.

Even the climbing mechanics, which feel far less tactile and responsive as those in the recent Assassin’s Creed games, failed to dampen my experience because I knew I could write another chapter of my Shadow of War story around the next corner, or during the next fight.

There’s a real systemic beauty to the process of stumbling on a high-level commander, fleeing in terror then hunting down the intel needed to take him down. It’s the metagame that kept Shadow of War ticking for the 40+ hours I’ve already played.

Talion and Celebrimbor, the gruff ranger and wraith-tastic elf, are back on death dealing duties. While their characters feel as flat and unremarkable as the first game, their skills and attributes have been given a powerful injection of steroids.

Skill trees have been expanded and with the steady flow of upgrade points, it’s not long before you’re building a set of core powers which amplify rather than define your play style. 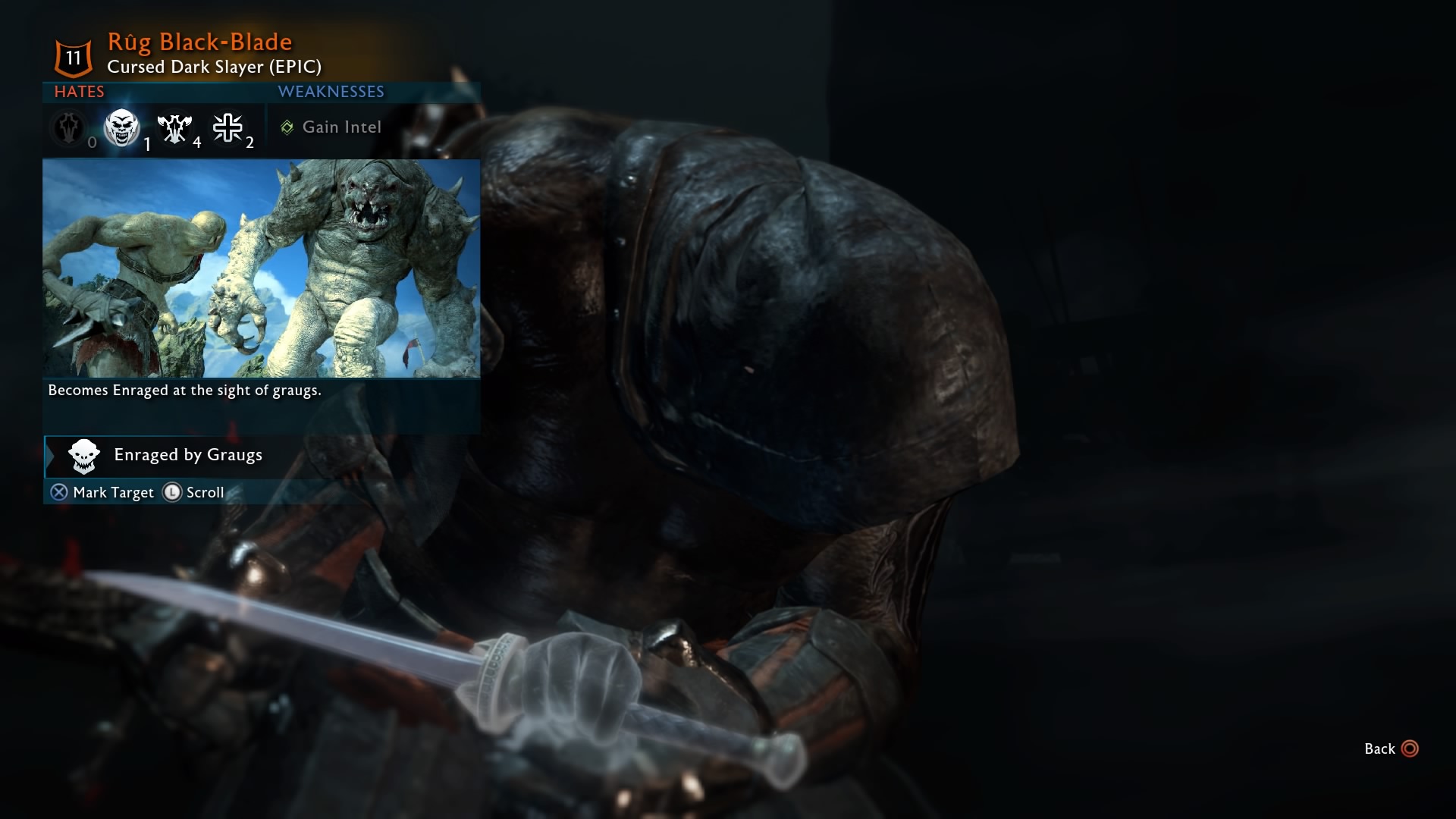 Prefer to work with a bow? You can plough points into the Ranged skill tree and turn your arrows into projectiles of whispering death. More into stealth rather than all out warfare? Shadow of War has you covered there, too. Each skill also has a set of upgrades that tweak your unlocked skills, which can be swapped out at any time depending on your tactics.

Armor and weapon enhancement has also been introduced. While this is nothing new to the world of action-RPGs, being able to enhance common, rare or legendary weapons and armor with gems that enhance your damage, or increase the chances of better gear being dropped, adds a small but welcome new dimension.

Sieges and fort assaults are also a new addition to the Middle-earth series and they play out just as dramatically as those shown off in the pre-release footage.

The preparation is almost as fun as the siege itself. Once again the Nemesis System provides you with a solid base to destabilize a war chief, killing off or recruiting his closest allies to your cause until he’s down to his last when you finally roll up to his gates with your own orcish army at your heels.

Each siege essentially works like a series of capture points as you drive your foes back further into their hold. There are a mind-boggling number of character models on screen at any one time, creating a burly brawl that will put your parrying skills to the test, even on the lowest difficulty setting. The ability to call in (or dominate) beasts such as catlike caragors or dragon-esque drakes makes every attack feel as unique and fresh as the Nemesis System itself. 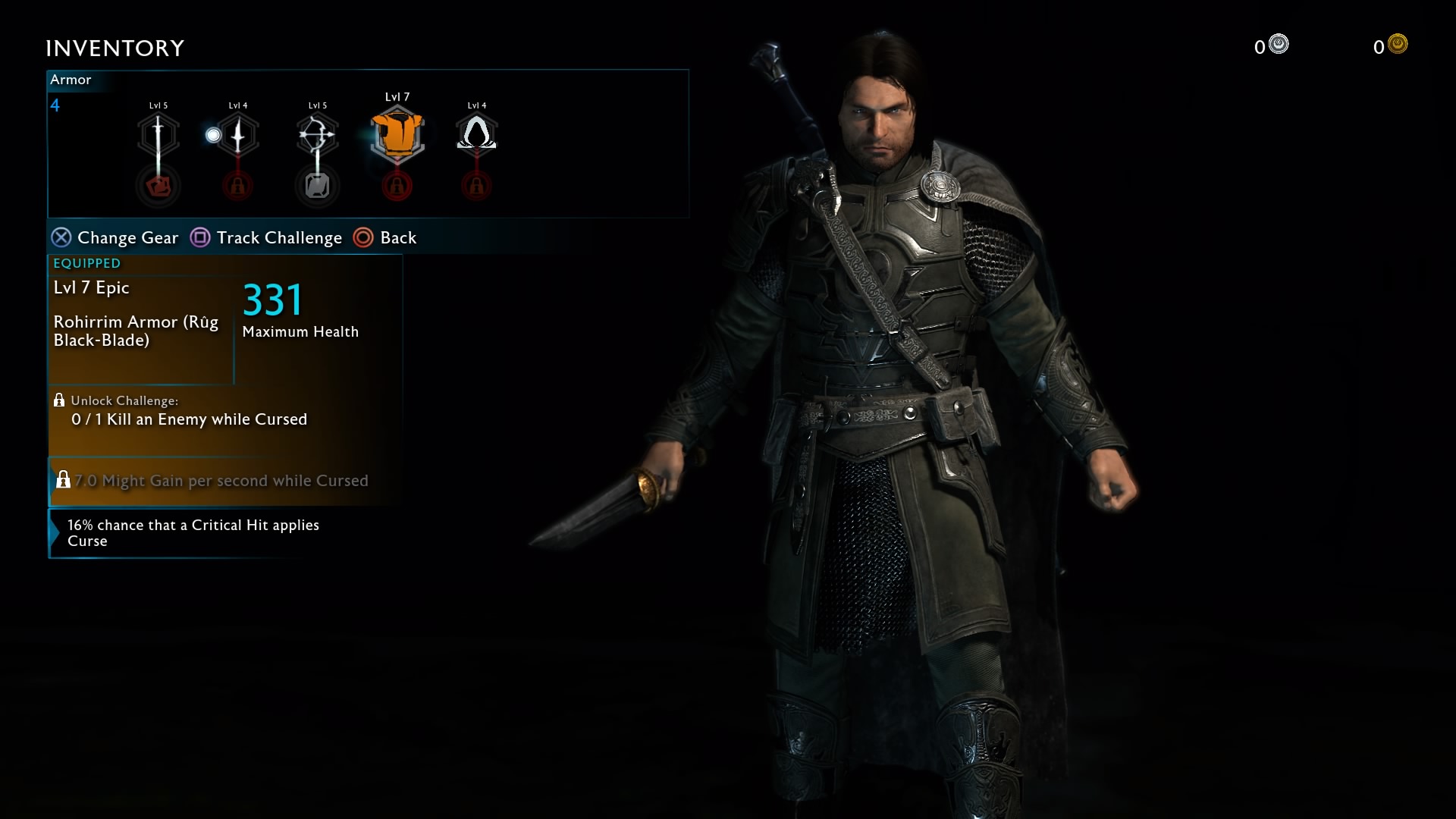 The bosses you eventually face are more like traditional boss encounters, complete with traps, obstacles and plenty of extra orcish fodder. Ultimately, however, these fights feel a little hollow. This is largely because these big bads are locked away in their forts up until your siege which robs you of the same narrative connection you’ve formed with Mordor’s other colorful inhabitants.

Then there’s those ‘controversial’ loot boxes. Their inclusion in Shadow of War has garnered, quite rightly, a relatively negative response, but the reality is the presence of microtransactions doesn’t detract from the final game.

Sure, the advertising for loot boxes every time you pause the game does begin to grate, but there are no in-game prompts which lure you into parting with real-life cash. You earn Mirian – Shadow of War’s in-game currency – through play anyway, and most of the time you’ll acquire epic or legendary gear through natural progression. 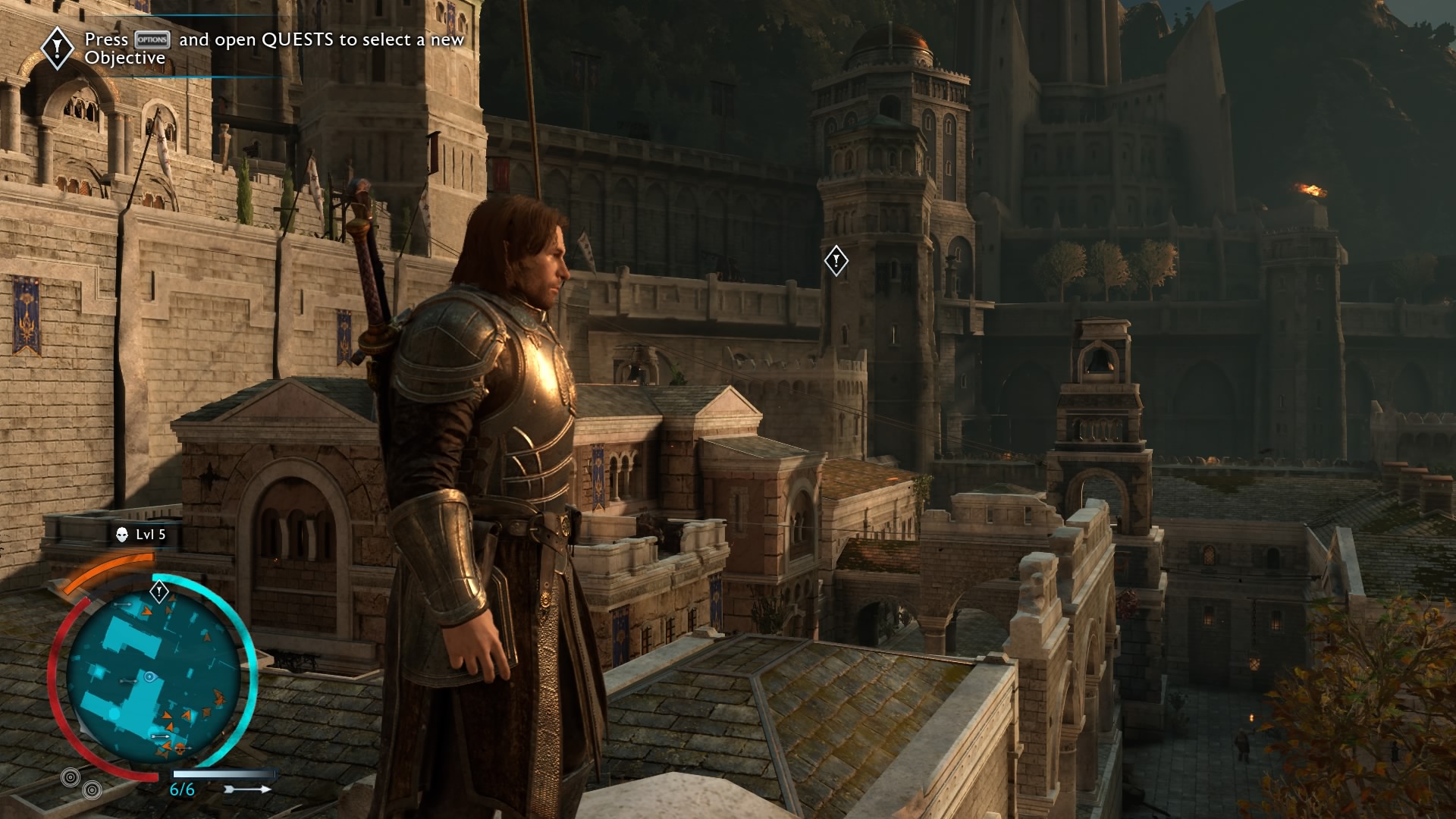 Shadow of War's map is huge so you’re going to spend so much time playing that you’ll pick up high level allies and weapons simply by completing quests, story missions and side activities.

We ended up acquiring a piece of Epic armor in our first two hours of play simply because we narrowly defeated a high-level orc assassin by chance. The Nemesis System is so systemic – and the game world itself so impressively vast –
that loot boxes serve no purpose, so you never feel like you’re being sold a half-finished product.

While its story ends up feeling onerous and far from the graceful prose that made Tolkien’s works so timeless, the world around it is bursting with originality and joie de vivre.

Yes, the open world nature of its sandbox setting means there are perhaps a few too many tropes (we’re looking at you, Middle-earth radio towers), but the Nemesis System offers so much depth you’ll rarely find enough time to gripe.

Bold, brilliant and brutal, Shadow Of War builds on all the strengths of its predecessor – even if it does have a unnecessary microtransaction system tacked onto its side.

This game was reviewed on PS4.

Techradar's review system scores games as 'Don't Play It', 'Play It' and 'Play It Now', the last of which is the highest score we can give. A 'Play It' score suggests a solid game with some flaws, but the written review will reveal the exact justifications.