Project Stream: Everything we know about Google’s game streaming service

Imagine your friend invests in a new GPU to upgrade their already expensive gaming PC so they can play the latest blockbuster video game. Now imagine you open the Chrome browser, and then open a new tab to play the very same video game. While your friends computer kicks into high gear, fans blistering, your computer (perhaps even a Chromebook) stays cool and quiet, because all you’re doing is streaming.

Rather than needing high-end hardware, Project Stream allows you to use whatever computer you have around to play video games. Google handles all the heavy lifting on its own servers, which can process the game at high resolutions and frame rates, encode it into a stream, and deliver the stream to you over the internet.

It may sound almost too good to be true, and only time will tell if it is. Right now, the Project Stream service is in Beta. And, while it's not perfect, it gets the job done, and serves as an impressive showcase of what the future of cloud gaming could look like.

It’s not clear how the final product will work, whether Google will maintain the Project Stream name, or even whether Google will continue the project after this beta. But, for the moment, as long as you’re connected to the internet with a fast and stable connection and you’re using a recent desktop version of the Chrome browser, you’ve got the setup needed to use Project Stream.

Playing a video game on Project Stream is as simple as opening a new tab in Chrome and going to the Projectstream.google.com page.

Google will prompt you to run a connection test that checks your internet bandwidth, the latency between your computer and the servers, and any data loss. Google requires a streaming rate of 15Mbps, latency below 40ms, and data loss below 5%. With these requirements met, you’ll be ready to dive into a game.

The beta of Project Stream is offering Assassin’s Creed Odyssey, which is nothing short of a demanding title. When you launch the game in your Chrome tab, it will go fullscreen, and run exactly as if it has been launched on a proper gaming computer (except without a deep graphics settings menu). You can play with a keyboard and mouse or connect a game controller and play that way.

All of your inputs on the computer get sent over to Google’s servers, processed in the game, and everything happening gets streamed right back to you. This is why that latency is so important, because you can’t have a good game experience if everything you do in the game shows up a second later.

The limits of Project Stream haven’t been detailed, but Google has shown off the service running at 1080p and 60fps, pretty much the bar for quality PC gaming.

So, in effect, you’re opening a new tab that pipes all your inputs to a high-end gaming PC that streams back the visuals and audio to your computer screen. This system is simpler than some others, which set you up with a virtual desktop that then remotely runs Steam, Origin, Battle.net, or what have you.

In the case of Assassin’s Creed Odyssey on Project Stream, you are still required to log into a Ubisoft account to play, but beta testers aren’t required to own the game.

It’s unclear at this point whether Google will require players to buy games and pay for the streaming service in separate transactions, or whether access to select games will be bundled into the service.

What games will be available on Project Stream?

For a 1080p 30fps game experience at High settings in Assassin’s Creed Odyssey, Ubisoft recommends a system with the following specs:

For 4K at 30fps and high settings, the recommended specs bump up to include 16GB of RAM, a more powerful AMD Ryzen 1700X or Intel Core i7 7700 processor, and a beefier AMD Vega 64 or Nvidia GeForce GTX 1080 graphics card. With Project Stream shooting for 1080p at 60fps, the type of system it’s offering would fall somewhere between Ubisoft’s recommended specs.

The truth is a computer that can handle Assassin’s Creed Odyssey at 1080p 60fps is going to be capable of playing a whole lot of games at these settings. Other major titles could easily see support on the service.

Games with a major online focus may have dicier prospects on Project Stream. Since competitive online games are often fast-paced and require split-second reaction times, the extra latency introduced by streaming will likely be an issue for serious competitors. That said, we don’t see these games being unplayable on the service. 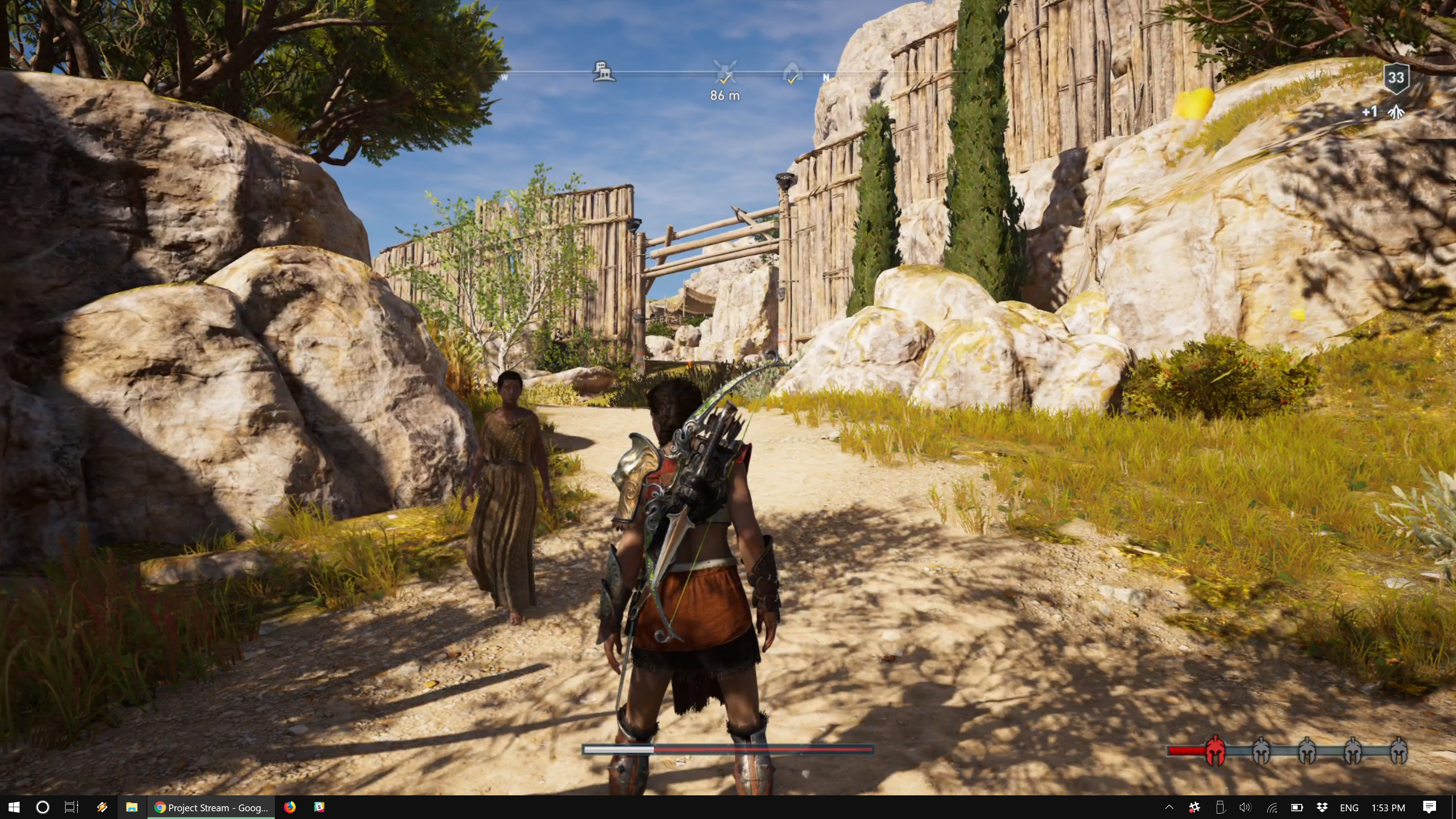 At its best, Project Stream is good. At its worst, well, Google won’t let you play below a certain threshold of quality, and you wouldn’t want to anyway.

We also played on a 5-year-old Chromebook, a 2-year-old Razer Blade, and a modern desktop gaming rig that would be happy to run Assassin’s Creed Odyssey at 1080p/60FPS on its own hardware. We even started one computer up while another was running the stream, and Google simply transferred control over to the second computer, with no stop in the stream.

Across the board, we’d describe the experience as at least playable. The highly dated Chromebook hardware didn’t hold it back from playing. The biggest issues come from a bad connection: if the connection speed drops, so does the game quality, with lower resolutions, latency, and far more noticeable compression.

That said, in our experience, the visual degradation came before the latency, so we were able to continue battling enemies smoothly even if they started to look like ghostly swarms of pixels.

Overall, the graphics are fairly good throughout, especially when playing on a high-bandwidth connection using ethernet cables. Colors, shadows, and anti-aliasing look fine, and the frame-rate seems to vary between 30 and 60fps. 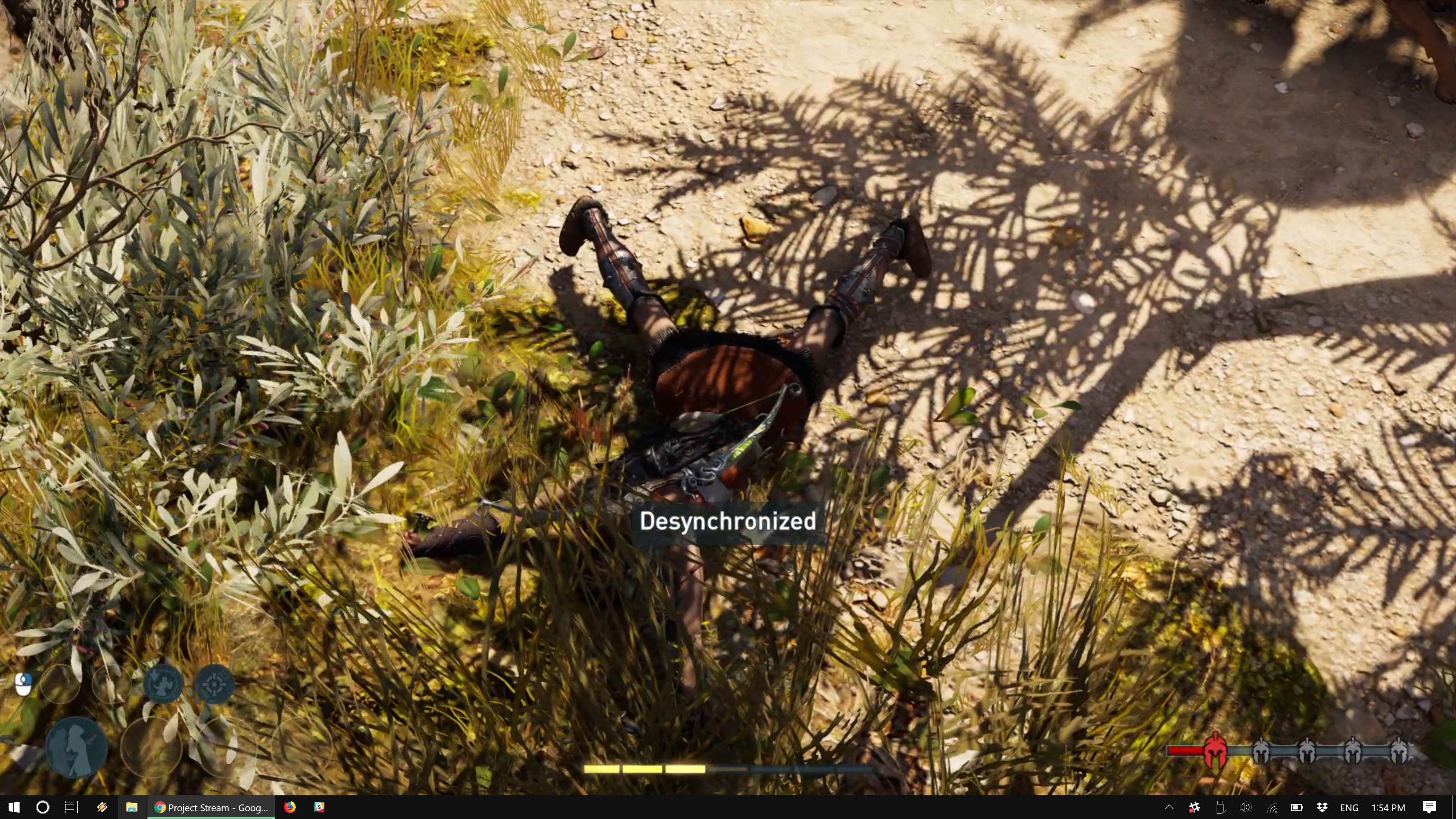 The low frame-rate was one of the two issues we noticed. The other was compression. Most of the time, it’s not super jarring, but when there’s a lot of detail in a scene and a lot of movement, the compression turns it all into a bit of slop. Character faces become a blur and hard edges (noticeably the character’s hair) go soft.

It would seem to be a sign of the lower bitrate enabling this type of streaming, but the truth is that most of the time it’s unnoticeable, and would be even harder to spot if you weren’t looking for it (we were looking for it). Panning the camera and running through dense wooded areas in the game (and combining the two) were the only times we were turned off by the dips in visual quality.

The experience isn’t mind-blowing, at least until you remember that it’s using so little of your computers processing power that you’ve literally got a full-system virus scan going in the background and nothing changed. The visuals are comparable to what you’d get on a console, except with compression artifacts here and there. And, with a stable connection, it compares rather favorably to in-home streaming on a Steam Link.

While the price and service model Google adopts will go a long way in determining whether Project Stream is worthwhile, we can say right now that it works, and it looks good doing it. But, will Microsoft’s xCloud do it better?