The mid-range smartphone market in India is very competitive and buyers are often spoilt for choices. Xiaomi's Redmi Note 6 Pro is selling like hotcakes going by the sales where the stocks vanish in mere minutes. In such a volatile environment comes a phone with bling, the Honor 10 Lite. It's got more style than your average Joe and is adamant in its resolve to create a place for itself in this crowded market. The Honor 10 Lite goes up against the undisputed king of mid-range smartphones, Redmi Note 6 Pro.

Smartphones in this price bracket seldom go for looks but the Honor 10 Lite clearly wants to buck the trend. The 10 Lite has a rear back panel that is reflective and tapers a bit towards both the sides. It's definitely not glass, but Honor cunningly tries to pass a plastic build with a sheen coating as one. The edges give the phone a much better grip than expected and a slim profile measuring 7.95mm. On the other hand, the Note 6 Pro is crafted out of metal and is 8.2mm in thickness. Due to the use of plastic in Honor 10 Lite, it weighs around 162g while the Note 6 Pro is a tad bit heavier at 181g.

While Xiaomi has not played around with the design of the Redmi Note 6 Pro, Honor leaves no stones left unturned. As the 10 Lite features a plastic back panel, it is more susceptible to scratches and scuff marks but at the same time, is more durable than glass. Being a bit narrower, the Honor 10 Lite makes for a comfortable grip, the same cannot be said for the Note 6 Pro which is a bit slippery due to its all-metal built. 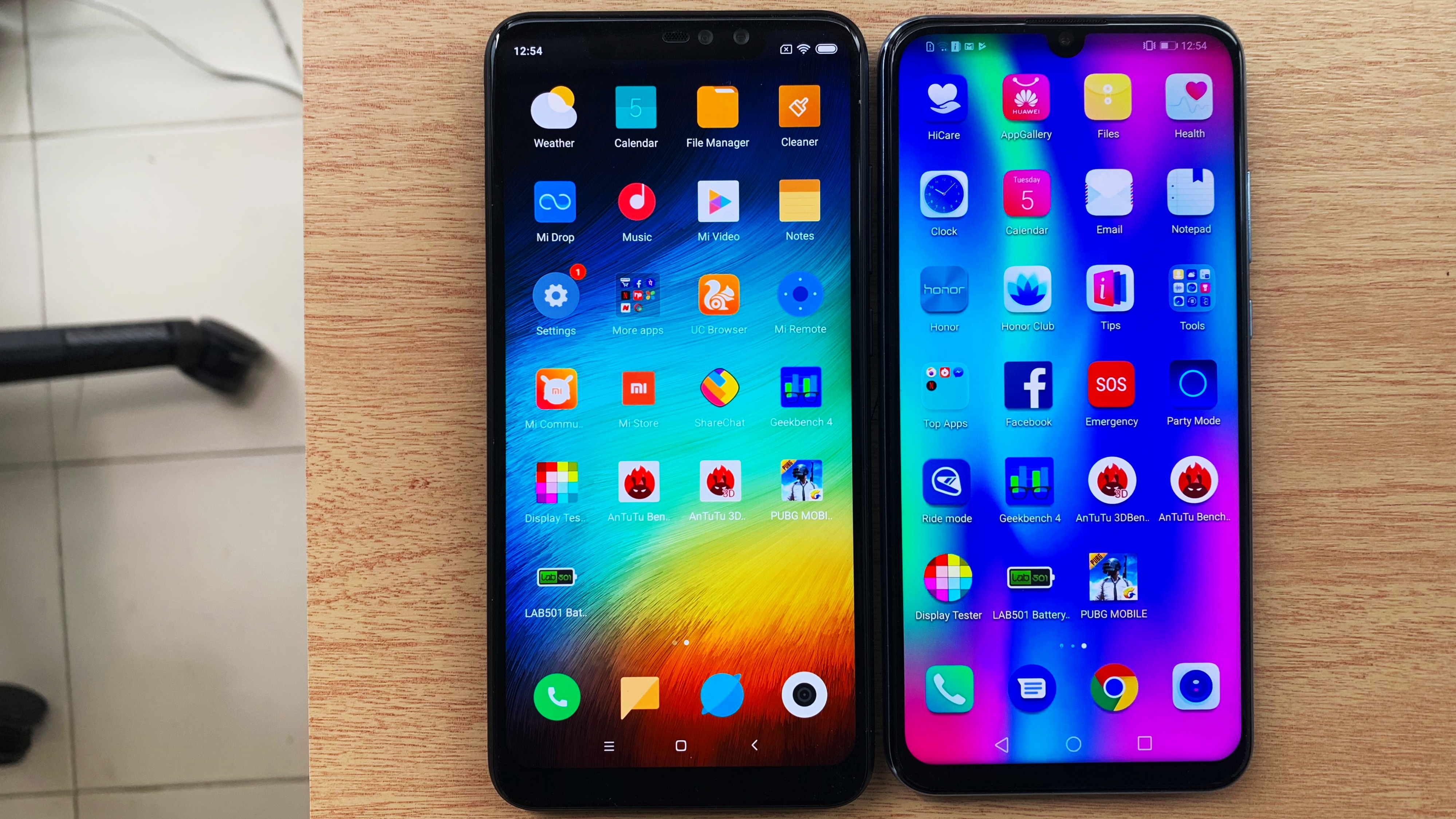 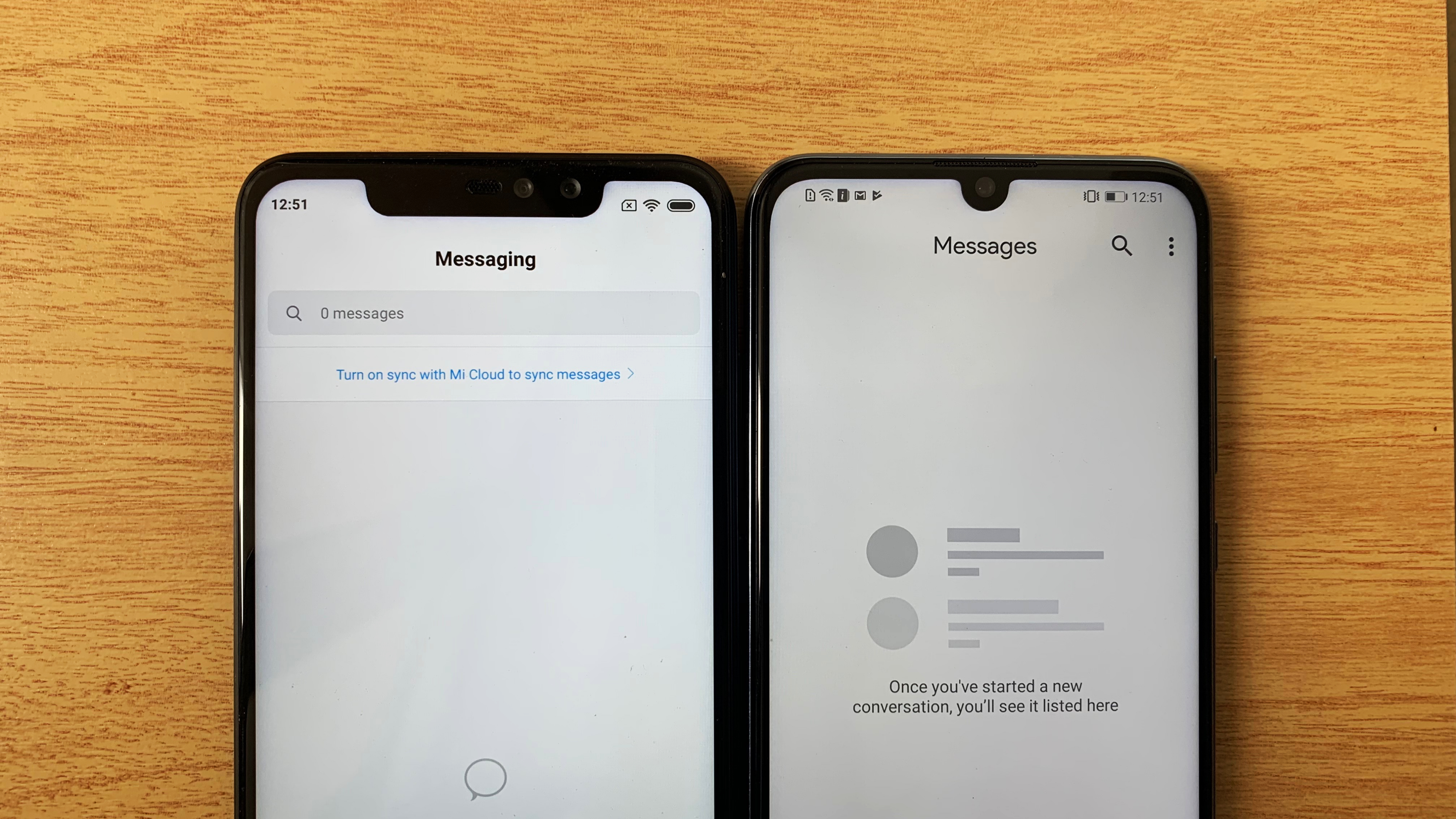 Honor 10 Lite has a 19.5:9 aspect ratio which is due to the waterdrop notch on the front. Honor calls its the Dewdrop Notch Display and it is more of a u-shaped notch than the usual waterdrop notch we have seen on phones like the OnePlus 6T. The notch allows Honor to offer up more screen estate to the users with relatively thin bezels. The chin is also narrower than that of the Note 6 Pro and is outfitted with a notification LED indicator.

In our usage, we found both the displays to be very similar in their way of reproducing colours and clarity. The Honor 10 Lite and the Note 6 Pro have a light blue tinge on the screen with a bit more saturation on the 10 Lite. Having said that, both the displays perform well and users can go for either of the two phones.

The dual camera setup on the Honor 10 Lite consists of a primary 13MP snapper with an f/1.8 aperture. It supports PDAF and is assisted by a single LED flash. There's a 12MP primary camera on the Note 6 Pro with an aperture of f/1.9 and a sensor size of 1.4 microns.

During daylight, the Honor 10 Lite produces images that are well-lit but with slight over-saturation and fewer details than the Redmi Note 6 Pro. The Honor 10 Lite isn't able to control light as the Note 6 Pro does. It not only manages to produce some detailed imagery with colour accuracy and right exposure but also overall better performance.

Out of the two, the image quality of the camera on the Redmi Note 6 Pro is much more superior to the 10 Lite. Even at night, the Note 6 Pro is able to capture more details while the 10 Lite is more of a hit-and-miss at night. It will take a couple of tries to get the shots correctly at night which is a bummer. There's a night mode which for some reason sharpens and saturates the colours even more.

Both the phones come with a secondary camera which assists the primary one in capturing all the depth information so that it could be used to create those depth-of-field effects in portraits. The Honor 10 Lite has a 2MP depth sensor while the Note 6 Pro sports a 5MP secondary camera. In our usage, we found that the portrait mode on the Redmi Note 6 Pro is much better than the 10 Lite. This is due to a somewhat unnatural blur, the camera optimizations which soften the details and even the edge detection isn't proper. The Note 6 Pro aces in portrait photography with natural looks and exposure.

On the front, the Honor 10 Lite sports a 24MP selfie camera with an aperture of f/2.0 while the Redmi Note 6 Pro has twin cameras on the front as well. It consists of a primary 20MP sensor and a secondary 2MP depth-sensing camera. The front cameras on the 10 Lite are surely not the best ones out there but to a certain degree, they can't be recommended from our side. Images from the front camera were often blurry with the colours looking a bit washed out. The Note 6 Pro doesn't have any such issue and hence it fares well in that department.

Taking a look at the specs, the Honor 10 Lite is powered by Huawei's Kirin 710 with an octa-core CPU and Mali-G51 MP4 graphics processor. Four Cortex-A73 cores clocked at 2.2 GHz for more demanding tasks and four power-efficient Cortex-A53 clusters clocked at 1.7 GHz comprise the brain of the phone. On the other hand, the Snapdragon 636 on the Redmi Note 6 Pro is the standard go-to SoC these days powering mid-rangers.

Unlike the Snapdragon 636 which is fabricated on a 14nm architecture, Honor goes a step ahead with the Kirin 710 as it is fabricated using a 12nm process making it more powerful than the SD636 on the Note 6 Pro. This difference can easily be spotted in the benchmark scores of both the phones.

Not really. The 10 Lite has a powerful SoC under its hood, but the phone does not feel nearly as powerful in usage. One of the main reason being the EMUI 9.0 user interface. The user interface feels clunky in regard to the competition even after it is based on Android 9.0 Pie. 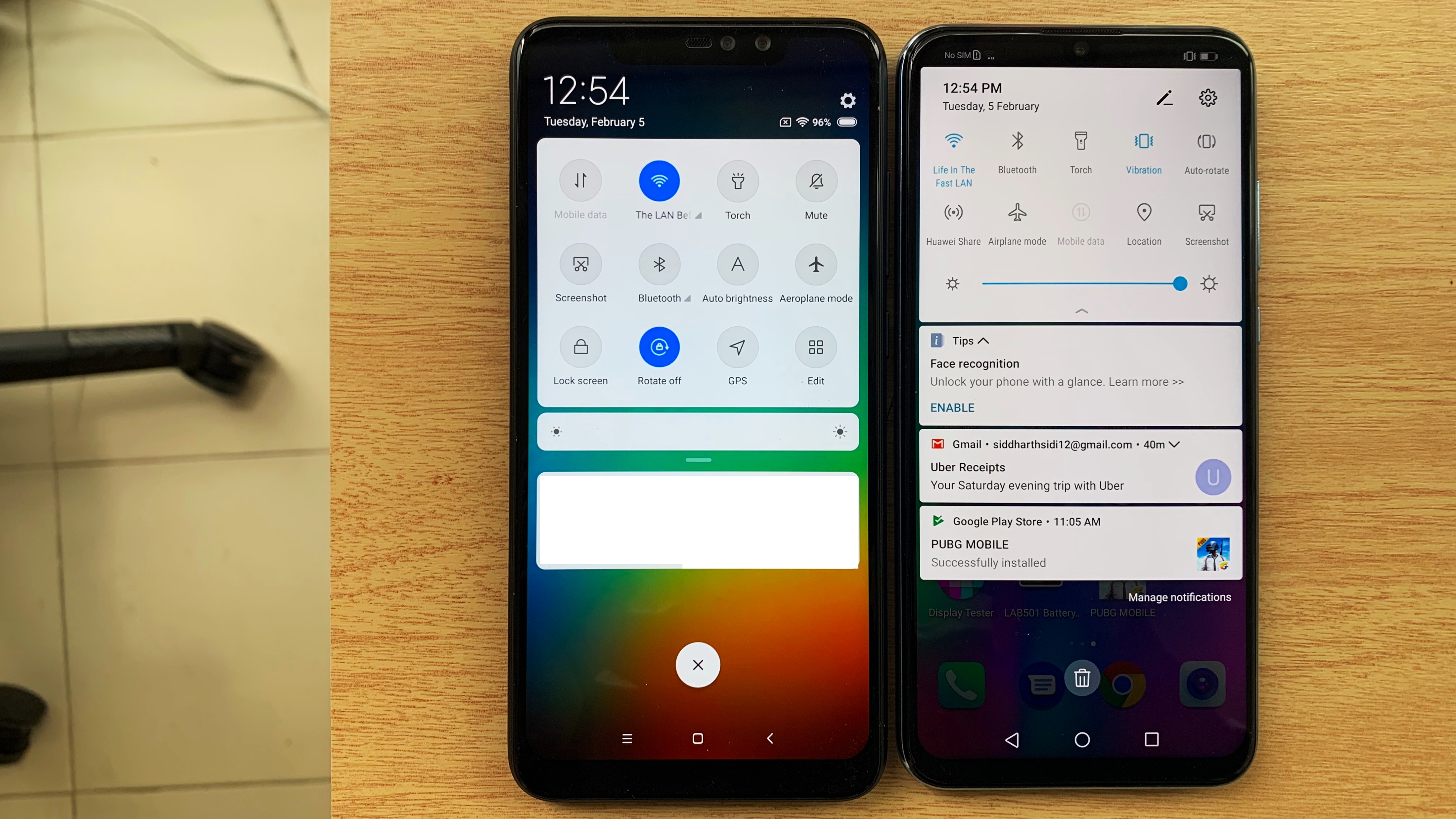 Huawei and Honor could certainly pick up a trick or two from the snappiness of stock Android or even MIUI for that matter. A couple of rounds of PUBG Mobile on medium settings is met with occasional lags and in-game stutters while on the Redmi Note 6 Pro, gameplay is swift. Redmi Note 6 Pro has a much-optimized user interface which allows for faster operations and speed. Again, a lot of the experience here has to do with UI optimizations and the EMUI 9.0 doesn't do justice to all that power.

The Redmi Note 6 Pro comes with a 4,000 mAh battery which supports fast charging. Honor 10 Lite has a slightly lesser battery capacity measuring 3,400 mAh and does not support fast charging.

In our tests, the Honor 10 Lite on an average showed a 10% dip in the battery over the course of an hour. The Note 6 Pro maintained an average of around 12% through the hour. Our use case scenario consisted of activities like browsing the internet, going through Facebook feeds, playing a round of PUBG, watching YouTube videos among others and the bigger battery does come into play. That's not to say that the battery performance of the Honor 10 Lite lags behind in any way, there's just isn't more capacity. Buyers especially looking for phones with a good battery life that could last a day or slightly more should take a look at the Redmi Note 6 Pro.

One question that pops-up often during the course of this comparison is how important is it for consumers as to how their phone looks. If it is a fairly big deal and looks are the only thing that makes you like a phone, the Honor 10 Lite is your go-to phone. It's got panache, is affordable, has good battery life and a different design.

Meanwhile, the EMUI 9.0 is a big letdown and spoils the whole experience of using a powerful phone. It doesn't feel as snappier in usage as the sheer power it packs under the hood. This is where the Redmi Note 6 Pro shines with its performance and an optimized user interface which just works.