The best green web hosting of 2018

Choosing a website hosting company typically involves weighing up many factors, such as price, features, support, reputation and more. The environmental impact of a web host probably won't rank high on most people's priority lists, if they think about it at all – but that could be a mistake.

Web hosting is very energy-intensive. Data centers may have tens of thousands of high-powered computers, most of these with permanently high CPU and drive usage, generating so much heat that the provider will usually need a massive cooling system to keep temperatures manageable.

The math can be surprising. Web Neutral Project founder Jack Amend calculates that powering the average website produces 4,500 pounds of CO2 a year, equivalent to driving the average new car for more than 10,000 miles. We're not quite sure what ‘average’ means in that context, but whatever the precise details, the message is clear: hosting has a very real environmental impact, and it's much more significant than you might think.

Green web hosting companies try to address this issue by investing in some form of carbon offsetting scheme, so that for every unit of energy they use, they pay to generate the same amount of energy (or sometimes more) from renewables, and pump that into the grid. This doesn't negate their environmental impact entirely – building and disposing of all those computers produces issues of its own – but it does at least mean that your individual website isn't adding to the problem.

Going green does tend to have some hosting consequences, in particular with the price: it's often a little higher than the competition. That's no surprise when a company is paying a second energy bill to generate renewable power, though, and the extra cost usually isn't significant. Check out our pick of the green hosting crop to find out more.

Founded in California back in 2008, GreenGeeks now proudly claims to be the ‘world's #1 green energy web hosting provider’, not surprising given that it is dedicated entirely to green causes.

That's a big statement, but there is some substance behind it. The company doesn't just say that its platform has been designed for maximum energy efficiency, it also promises that "for every amperage we pull from the grid, we invest three times that in the form of renewable energy via Bonneville Environmental Foundation." So in theory at least, your hosting isn't just carbon-neutral, it's carbon-reducing.

GreenGeeks' hosting range isn't quite as impressive. There are the usual set of plans – shared products, application hosting, VPS, dedicated – but there isn't much choice, and what you do get is mostly very average.

Pay for three years upfront and you can get everything for an equivalent $3.95 (£2.80) per month – $9.95 (£7.10) on renewal – and a 30-day money-back guarantee represents a risk-free way to test the service for yourself. It's a good deal, and shows that green hosting isn't just about making eco-friendly gestures: you can find some capable products, too. 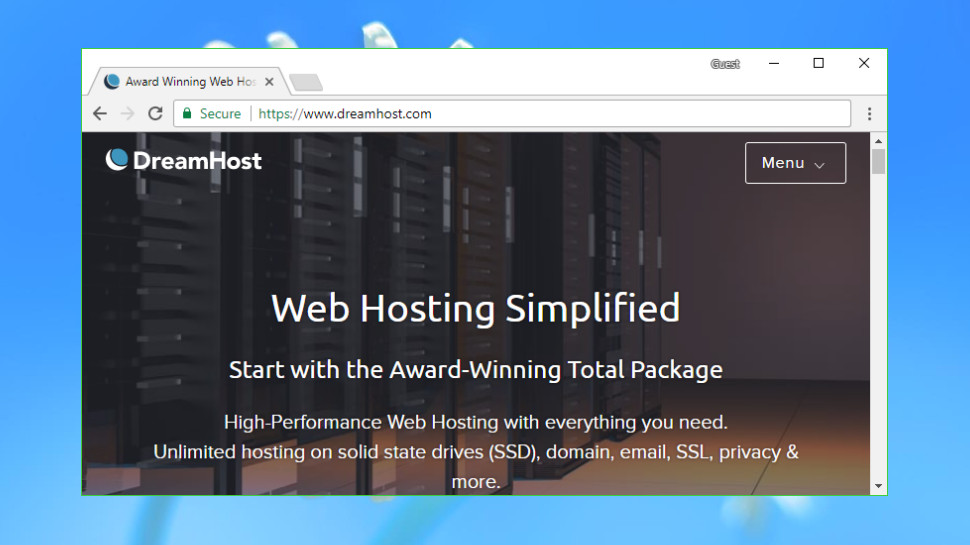 Despite the increasing interest in green hosting, many providers do little to flag up their eco-friendly credentials. The DreamHost website doesn't talk about the issue on its front page, there's no clear link or green 'energy saving' logo, or indeed no sign that the company is thinking about this at all. But dig a little deeper and you'll find the reality is very different.

DreamHost says its data centers are powered by grids that obtain electricity from many renewable sources, for instance. It's a partner in state-level 'clean wind' programmes. Cooling systems are designed for efficiency, and the evaporative cooling plants use both municipal and reclaimed water.

The company offices are LEED Platinum and EnergyStar-certified. Optimized heating, ventilation and air conditioning plants keep energy demand down all year round, and the working environment is designed with sustainability in mind: recycling bins everywhere, electronic forms to reduce paper usage, disposable cups and plates replaced by ceramic, financial incentives to use public transportation and work-from-home policies to keep some people off the roads entirely.

All this environmentally-friendly infrastructure powers a good-looking range of highly specified and fairly-priced products. Shared hosting gives you unlimited everything from $7.95 (£5.70) a month. Fully managed VPS hosting starts from $13.75(£10.45) a month, and the list goes on.

DreamHost has its issues, too – in our review, we weren't impressed by the non-standard hosting panel, and found support response times could be slow – but it's still a decent host in many areas, and an exceptional 97-day money-back guarantee shows just how confident the company is in its service. 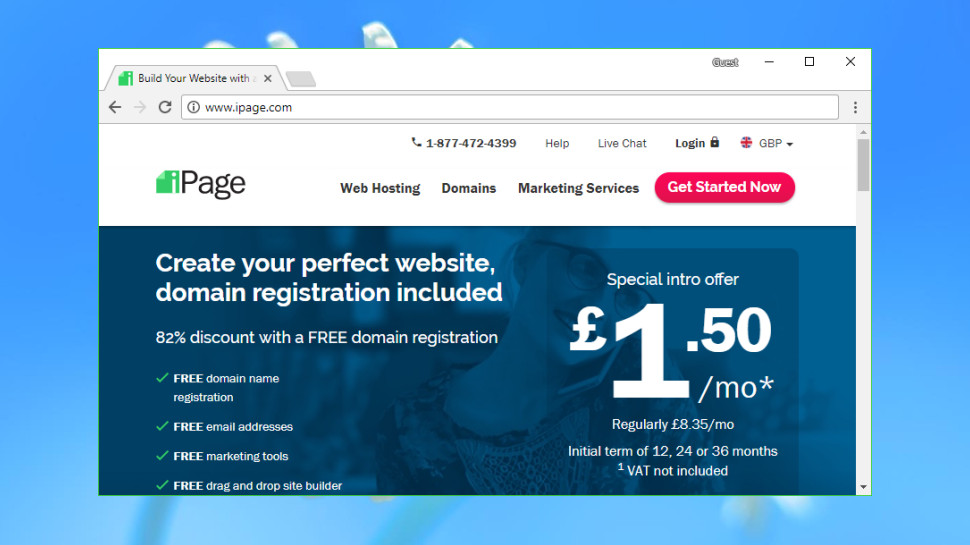 Green web hosts make all kinds of claims about their eco-friendliness, but it's not always easy to figure out what these mean. A provider might say it's using an energy-efficient cooling system, for instance, but how does that compare to the rest of the industry, and what could the savings be, if any? There's no way to tell.

iPage sidesteps this problem by avoiding the usual vague chat, and instead presents a clear and definitive green policy in a single sentence: "For every KWH of energy that iPage uses, the company purchases Renewable Energy Certificates to offset that amount with wind energy by 200%!"

Simple, straightforward, and it outperforms most claimed carbon-neutral providers by offsetting twice its energy usage (although GreenGeeks manages 300%).

iPage's hosting products also have plenty of appeal. Prices are sometimes a fraction higher than the competition, but there some excellent introductory deals – three years feature-packed shared hosting for $1.99 (£1.50) a month, renewal at $8 (£6) – and a range that also includes managed WordPress, capable VPS plans and powerful dedicated servers. Well worth a browse for demanding users who are more interested in functionality than getting the lowest possible price.

A2 Hosting is another provider that doesn't boast about its green credentials. There's not a word about the topic on its website's front page, and unless you're in the habit of browsing web host 'About' pages you might never know anything about A2’s green-friendly aspects.

This is a little surprising, because in reality A2 Hosting has more to boast about than many providers. This starts with a Carbonfund.org energy offset scheme which has allowed the company to be effectively carbon-neutral since 2007. This isn't just about buying energy from wind farms: Carbonfund.org also works on reforestation and promoting energy efficiency in many other areas.

A2 highlights some of its green hosting practices, too, covering everything from using coffee mugs instead of disposables, to allowing telecommuting for its staff as much as possible.

Whatever you think of its environmental attitudes, A2 Hosting's plans have a lot of appeal. Starting prices are a little higher than some, but that's mostly because the company is focused on delivering power and functionality, rather than barebones products which only exist to create a low headline price.

Even the most basic shared hosting account gets free site migration, for instance. Not to mention Let's Encrypt SSL, Cloudflare CDN integration, and regular virus scanning. Oh, and performance-boosting AnyCast DNS. You don't just get one-click installs for WordPress, PrestaShop and others: A2 gives you optimized performance settings, too. And there are data centers in the US, EU and Asia. Not bad at all for a starting price of $3.3 (£2.6) a month, rising to $9.99 (£7.8) on renewal. 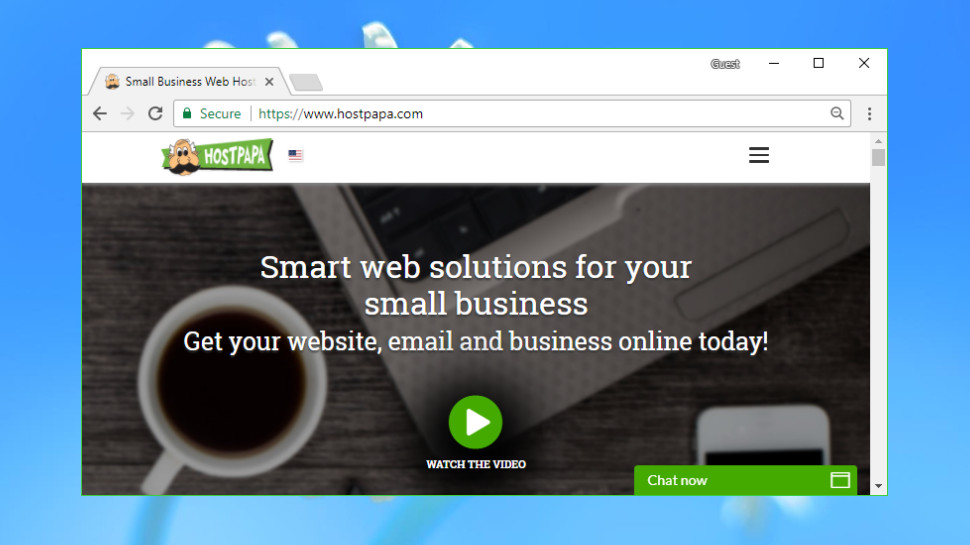 HostPapa was one of the first hosting companies to commit to going green, and we're not just talking vague claims about energy-efficient data centers: it's making real and significant promises.

The company explains that it "purchases ‘green energy tags’ or certificates from a certified green energy supplier. That supplier calculates the total energy consumption of our operation and uses their suppliers of green energy to pump in 100% equivalent energy back into the power grid."

HostPapa's products include shared hosting, managed WordPress and a website builder. Prices are a little higher than the competition, but individual plans could appeal in other ways. Even simple shared plans offer unlimited bandwidth and disk space (although Starter plan has 100GB disk space), for instance. And although there's no dedicated hosting, the company has some monster VPS packages, with the high-end Extreme plan giving you 12 CPU cores, 24GB RAM, 1TB storage and 8TB bandwidth for $299 (£215) a month (first month is $249.99).