The best rugged smartphones of 2018

If you're after a phone that can withstand the elements, or survive accidental drops and knocks, then our list of the best rugged smartphones in 2018 is here to help.

Not only are the best rugged smartphones money can buy water and dust proof, they also come in shock-resistant cases, which makes them ideal for working outdoors. If you're a fan of outdoor activities such as hiking, canoeing and climbing, then these brilliant rugged smartphones are a great choice as well.

The best rugged smartphones will have undergone stringent IP68 tests to ensure that they meet military-specified standards for protection against vibration, shock, extreme temperatures, dust and water (albeit in controlled environments).

The best rugged smartphones will also offer extra features to distinguish themselves from the rest of the competition: some have infrared camera functionality, others have sound level meters and even VOC (volatile organic compound) detectors.

So, read on to find out our top picks for the best rugged phones on the market right now.

The Cat S61 is, in our view, the best rugged smartphone money can buy in 2018. This is a brilliant flagship phone in its own right, and it's a significant improvement on its predecessor (the Cat S60) in almost every way. At 162 x 77 x 13mm with a weight of 259g, this is a substantial piece of kit, and one that feels reassuringly solid and robust.

In fact, it features both MIL Spec 810G and IP69 certifications, meaning the phone is designed to endure even high pressure water jets which are common in many industries. There’s plenty of polycarbonate and rubber to absorb shock and protect the device from drops, and a metal frame to improve its overall structure.

It also features handy tools not found elsewhere, such as an indoor air quality sensor as well as a laser-assisted distance measurement tool, and it also comes with some decent smartphone specifications as well, including 4Gb RAM, a Snapdragon 630 SoC and a lovely 5.2-inch 1080p screen. It comes with Android 8.0 and will be kept updated with the latest versions of Google's operating system in the future. 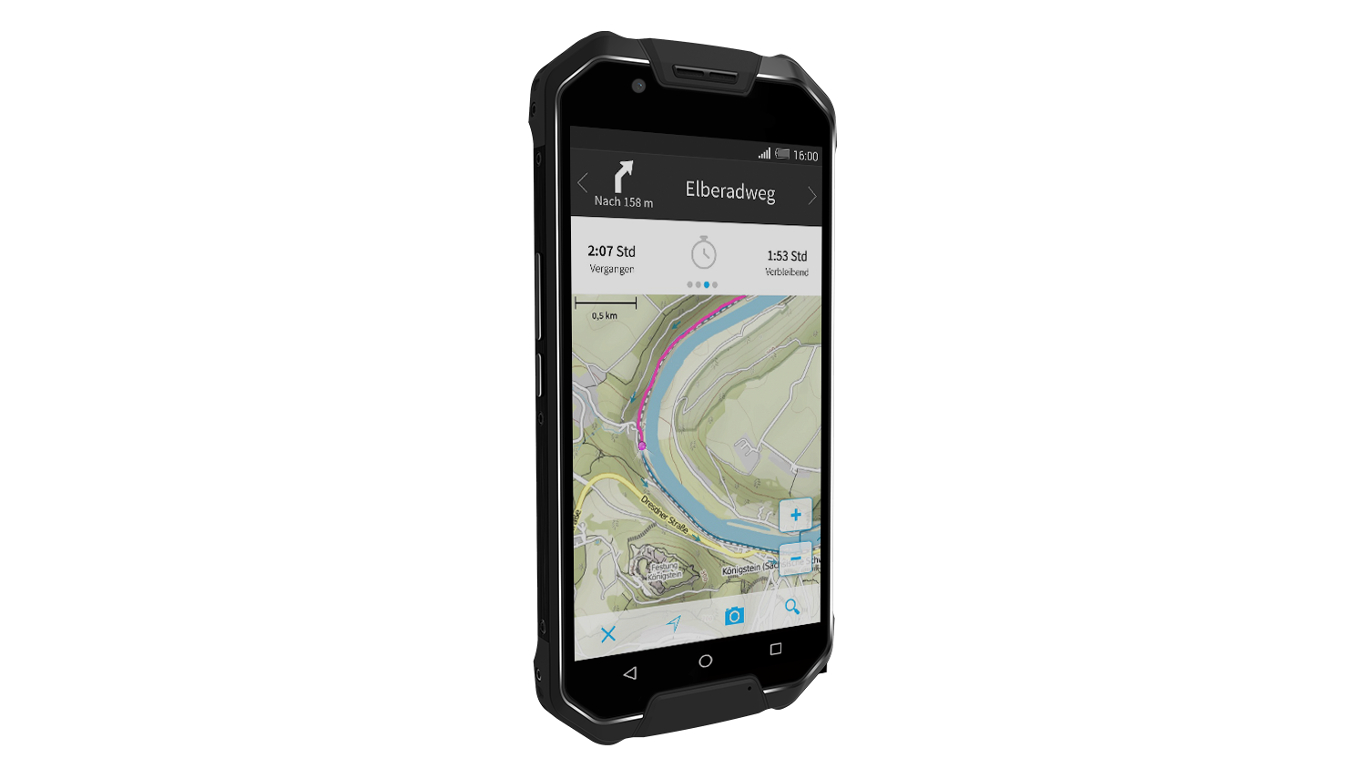 We tested out the AGM X1 earlier this year and found that it was mighty likable. The X2, which has been just released, promises to push the envelope even further with a complete upgrade to the internals. An upgraded Qualcomm processor now runs alongside 6GB of RAM. There’s a 16-megapixel camera at the front and a pair of 12-megapixel sensors at the back, surpassing even established models like the Samsung Galaxy S8.

Other than the boosted battery capacity (6000mAh) and 128GB of on-board storage, there’s also a VOC (volatile organic compound) detector, which makes this an incredibly useful smartphone for the right audience. It does support NFC and USB Type-C but offers no wireless charging and it supports only one 4G SIM.

Note: Gearbest is an online Chinese retailer, and while its quoted price includes delivery, it’s exclusive of any taxes that may be levied by HMRC or the courier companies on behalf of the vendor. If you want to buy tech from Chinese sites, we’d advise you read this first. 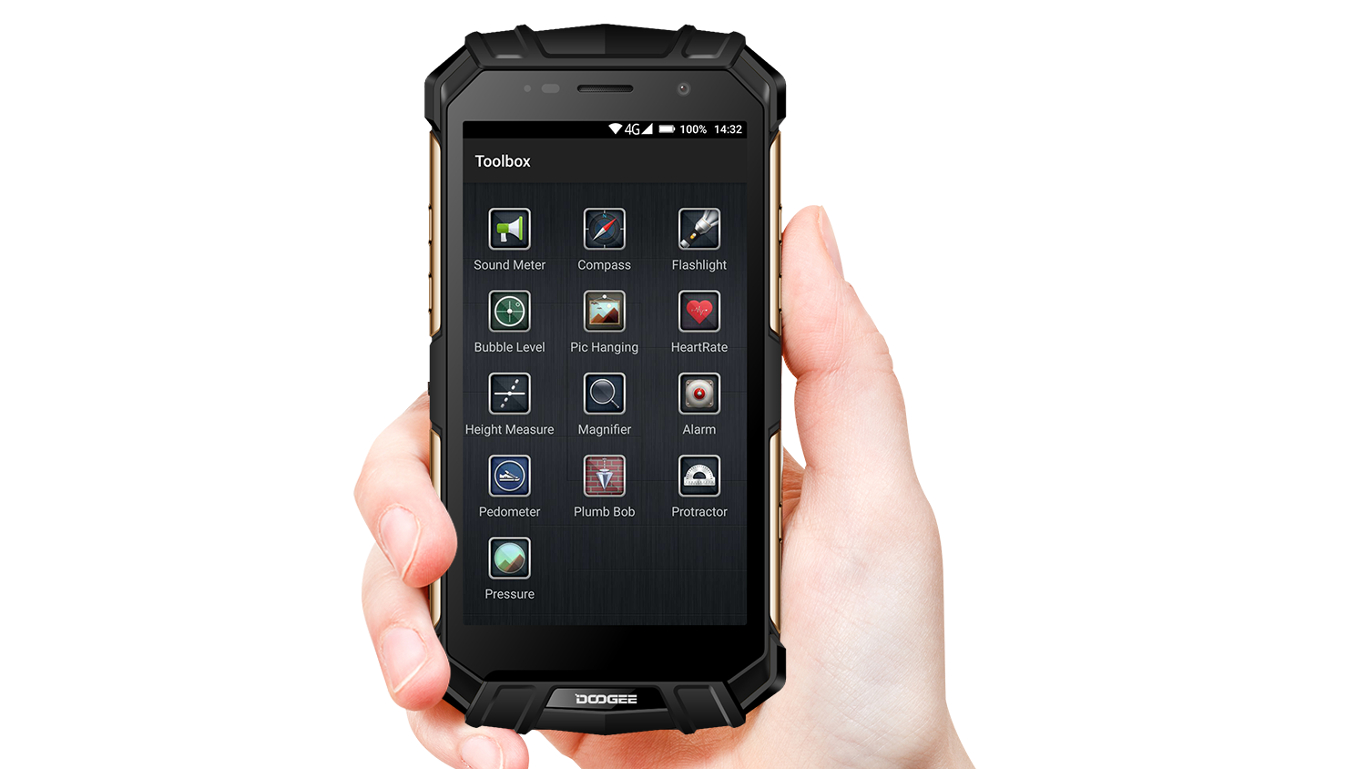 The industrial, rugged look of the Doogee S60, and the fact that it uses a microUSB connector – not to mention the rather silly sounding name – might put off some potential buyers here. But if you can overlook these downsides, then this device has a lot to offer – and it’s half the price of the above AGM X2.

The S60 packs a powerful punch, with a Gorilla Glass 5 glass overlay on the display, plus it offers dual SIMs plus dual standby, a 24W quick-charge charger, NFC and even wireless charging (but no wireless charger). It is crammed with sensors and tools as well, which will come in useful for handymen (and women): there’s a barometer, a gyroscope, a coulomb meter, a sound level meter and even a bubble level. 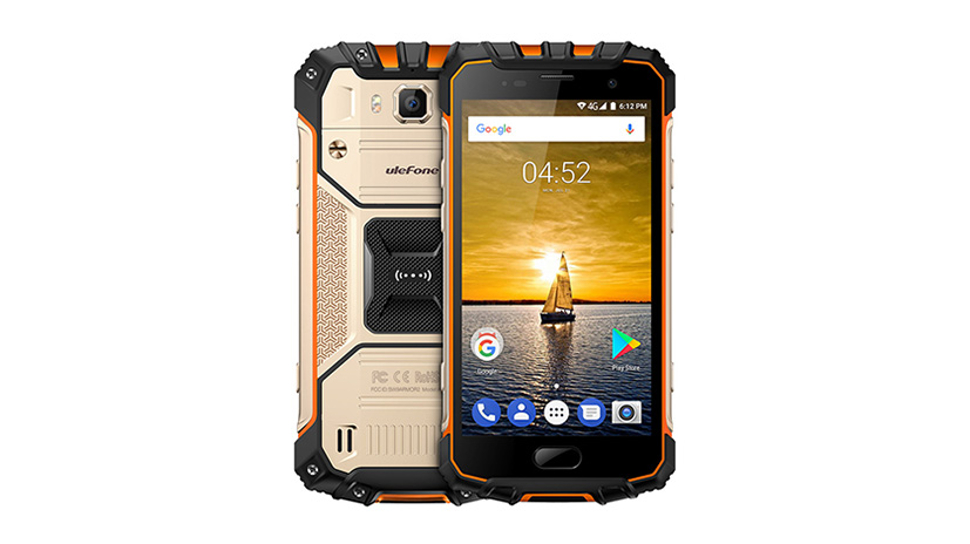 The Ulefone Armor 2 is one of a number of recently released rugged smartphones that offer significant upgrades over their predecessors at a very affordable price, far cheaper than either the S60 or the AGM X2. Somehow it still offers similar core components (a Mediatek Helio P25 octa-core CPU, 6GB of RAM and 64GB on-board storage).

The camera subsystem is the weakest of the three but nonetheless on par with other top-end non-ruggedized devices like the Samsung Galaxy S8 (note that the pixel count is only part of the equation when it comes to gauging the overall picture quality). This phone’s battery capacity is slightly under par and there’s no audio connector, so you will need to use a converter. Like the S60, it is bundled with a virtual toolkit that contains a few tools; but there’s no sound level monitor. 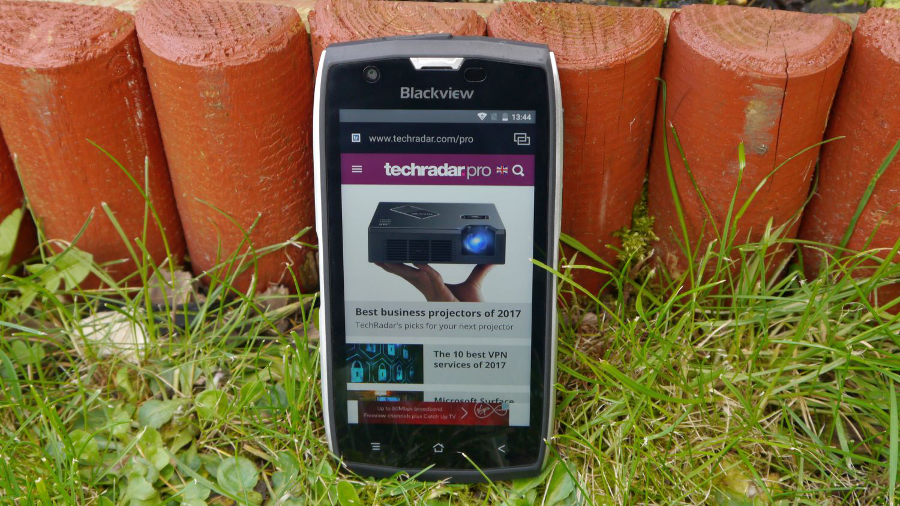 The Blackview BV7000 Pro is a balanced product aimed at a wider audience beyond the traditional builders and ruggedized verticals. In use, the phone proved to be a capable performer and didn’t stutter or run sluggishly during our brief encounter. The screen is gorgeous – even in broad daylight – and little additions like ‘smart somatosensory’ (which uses hand-waving to trigger events), the customizable notification light, or Parallel Space, which allows for apps to be cloned and used by multiple users, are great differentiators.

There’s no wireless charging or NFC, plus you’re still limited to 802.11n Wi-Fi. For now, though, the BV7000 Pro provides an interesting compromise if you want a mid-range model that doesn’t give away your trade, can take a few pictures in torrential rain, and doesn’t break the bank. 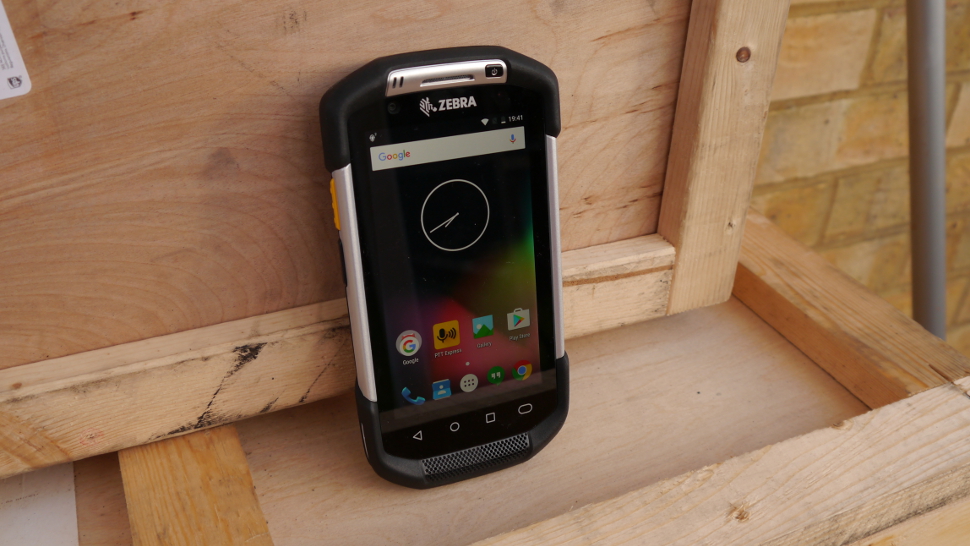 The Zebra TC75x brings mid-range smartphone performance to ruggedized devices, albeit with a hefty price tag. The handset does more than make up for its cost, though, thanks to an impressive build quality and an enterprise-level application suite (and support). It is far more expensive than the rest of the competition, but then again, this rugged phone’s features put it at the cutting-edge of what is usually a rather slow moving niche.

A number of challengers have appeared on the market (Cipherlab, Cat, Unitech) but a successful product requires more than just a cheap price tag. Motorola’s legacy lives on and the wealth of expertise that the TC75x packs puts the device in a league of its own, both in terms of price and overall features. 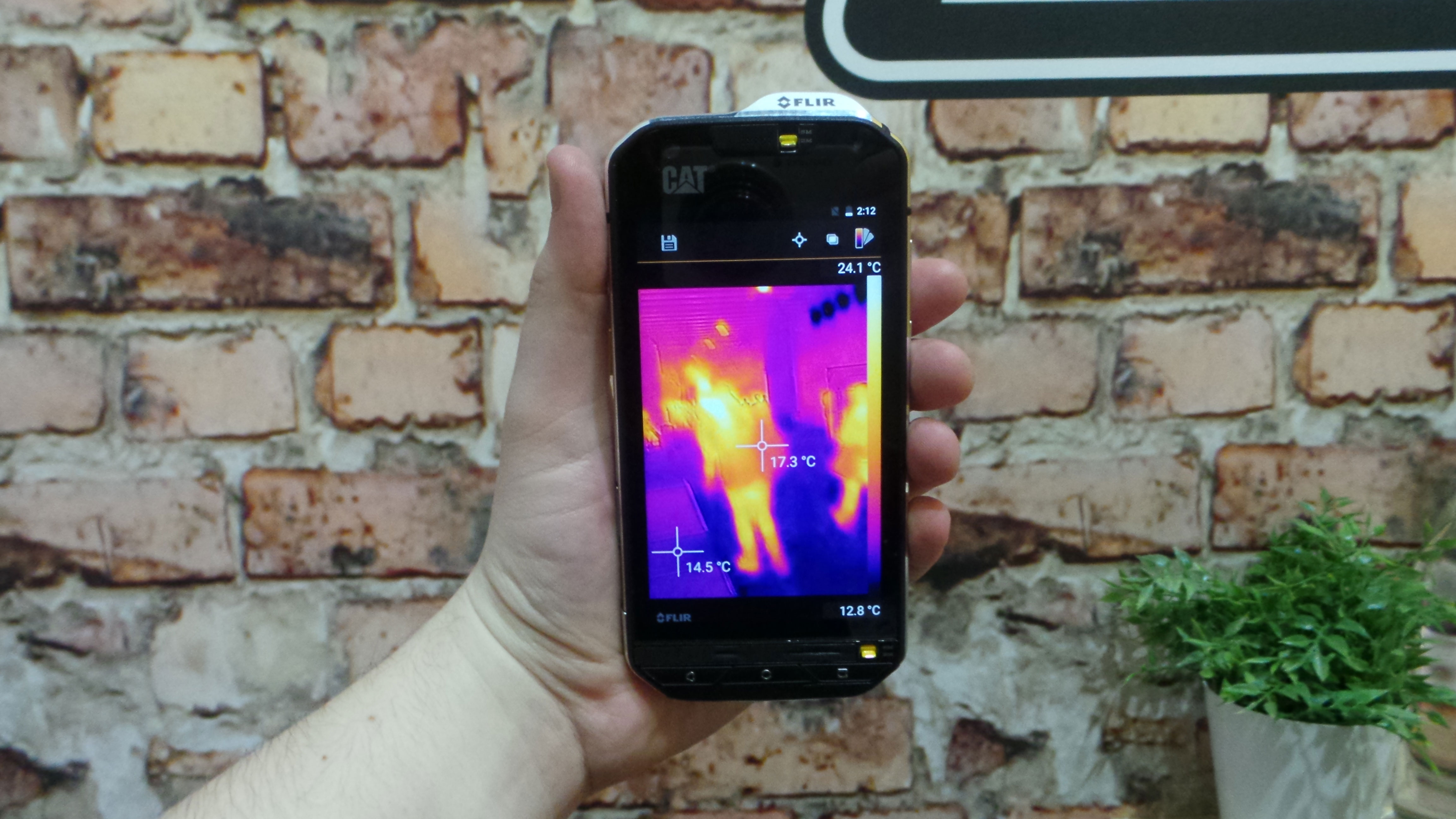 Other noteworthy ruggedized smartphones available on the market are:

The Cat S60 is a good choice if you want to have access to a portable, feature-heavy and very handy infrared camera.

The Samsung Galaxy S8 Active is ideal for those who want a branded ruggedized smartphone with the latest technology inside.

The Samsung Galaxy S7 Active is a smart move if you want the best value branded ruggedized smartphone.

The Homtom HT20 is the handset to go for if you want the absolute cheapest quality smartphone.