A dedicated software uninstaller makes your life much easier, letting you uninstall several programs at once and remove any residual files and registry entries automatically, helping keep your PC clean and fast.

The best software uninstallers will also monitor new programs as they're uninstalled, making it easy to reverse the changes they've made to your system for more thorough results.

We've put the best software uninstallers to the test and picked out the ones that make removing unwanted programs as quick and effortless as possible, but if your needs are different then you might like to test a few free trials before deciding on one. You can always use your final choice to remove the others once you’ve made up your mind! 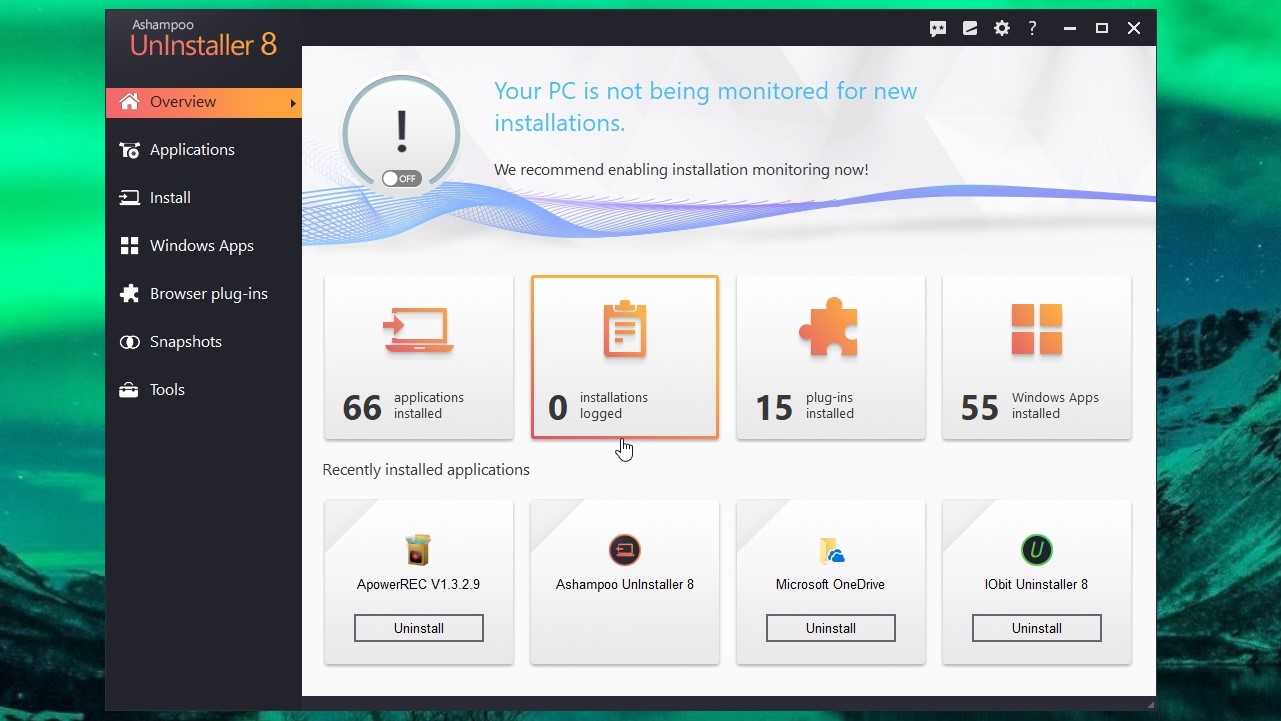 Ashampoo Uninstaller 8 is thorough, feature-packed, and will clean up every trace of unwanted programs in moments. It presents all recently installed programs in a clear menu, including the date when they were installed, plus star ratings from other users, indicating the quality of a program and how likely it is that you’ll want to hang onto it. If you have a lot of unfamiliar programs, Ashampoo Uninstaller gives you the option to see only those with negative ratings.

Once a program is uninstalled and Ashampoo Uninstaller has removed residual files, it'll show you how many it's deleted and the amount of disk space reclaimed as a result. Not strictly necessary, but satisfying.

The software can attempt to hide the program’s original uninstaller, which is helpful for programs that require you to click through multiple steps or open web pages in your browser in an attempt to make you change your mind. Unlike many software uninstallers, Ashampoo Uninstaller will also give you a status monitor so you can see how far the scan and removal has progressed.

Ashampoo Uninstaller 8 can log installations automatically (or manually if you drag and drop the setup file into the appropriate window), and can remove pre-installed Windows apps and browser plugins (from Internet Explorer, Chrome, Firefox and Edge).

If you're having trouble with a tricky program that just won't uninstall, or you want to clean up multiple programs at once, Ashampoo Uninstaller is the tool for you. 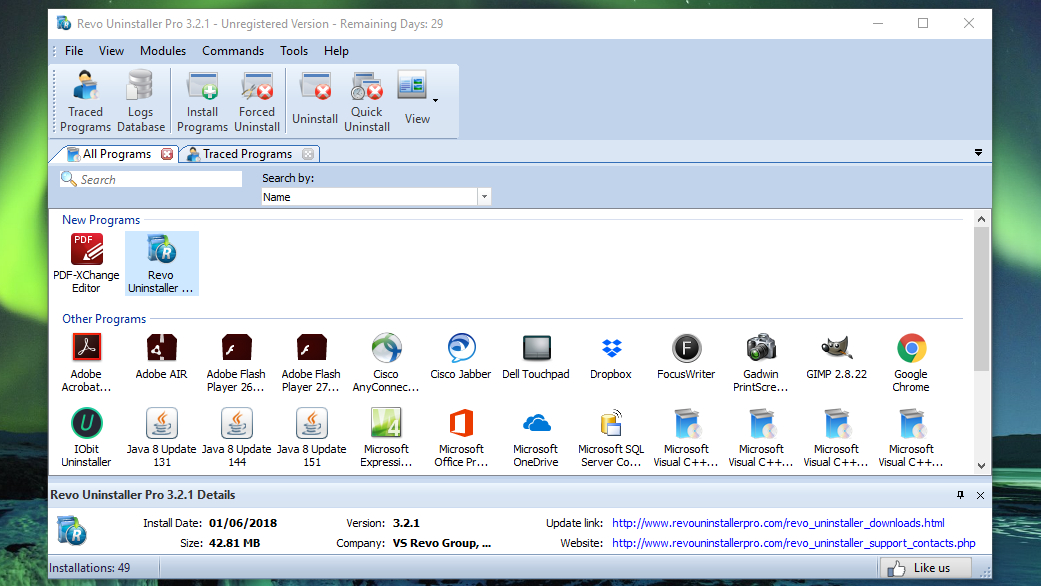 Thoroughly removes every trace of programs, with a great install monitor

Like Ashampoo Uninstaller, one of Revo Uninstaller’s stand-out features is its ability to monitor changes to your PC’s files and registry in real time when you install a program. This lets it track exactly what the installer does, then roll them all back as though the program was never installed in the first place. No residual files and no old registry entries.

It offers three options: forced uninstall, uninstall and quick uninstall. The first is designed to purge all remnants of a program that’s already been uninstalled, but has left traces behind. The regular option runs the program’s own uninstaller, then lets you scan for residual files, with three scanning modes: safe, moderate and advanced. The quick uninstaller removes the program, then performs a standard check for leftovers automatically.

Revo Uninstaller's interface isn’t the most attractive thing in the world, but that’s not important – it's powerful and effective, and its excellent install monitor means it's a very close second to Ashampoo Uninstaller. Ashampoo's rating system gives it the edge in our opinion, but we recommend trying both to see which works best for you. One of Geek Uninstaller Pro’s many advantages is that unlike many premium uninstallers, which are only available as an annual license, its US$24.95 asking price is a lifetime one-off fee. There’s also a free version of Geek Uninstaller, but the premium version is well worth the price thanks to its installation monitor (Install and Trace) and batch removal option – both well worth the asking price.

Geek Uninstaller Pro offers both regular and forced removal, and clearly shows the date the software was installed, plus the version number and the publisher – helpful if you don’t recognize it, and are trying to work out where it might have come from.

The ‘Hidden’ option is particularly interesting, showing programs that can’t be removed in the usual way and can only be force-removed. There usually isn’t much information available about these, so you’ll need to perform a quick search online to find out whether they’re safe to delete.

There are a few extra tools thrown in, including a task scheduler, but these don’t add much. Not that that’s a problem; Geek Uninstaller Pro is a great little program remover that doesn’t need any additional frills. 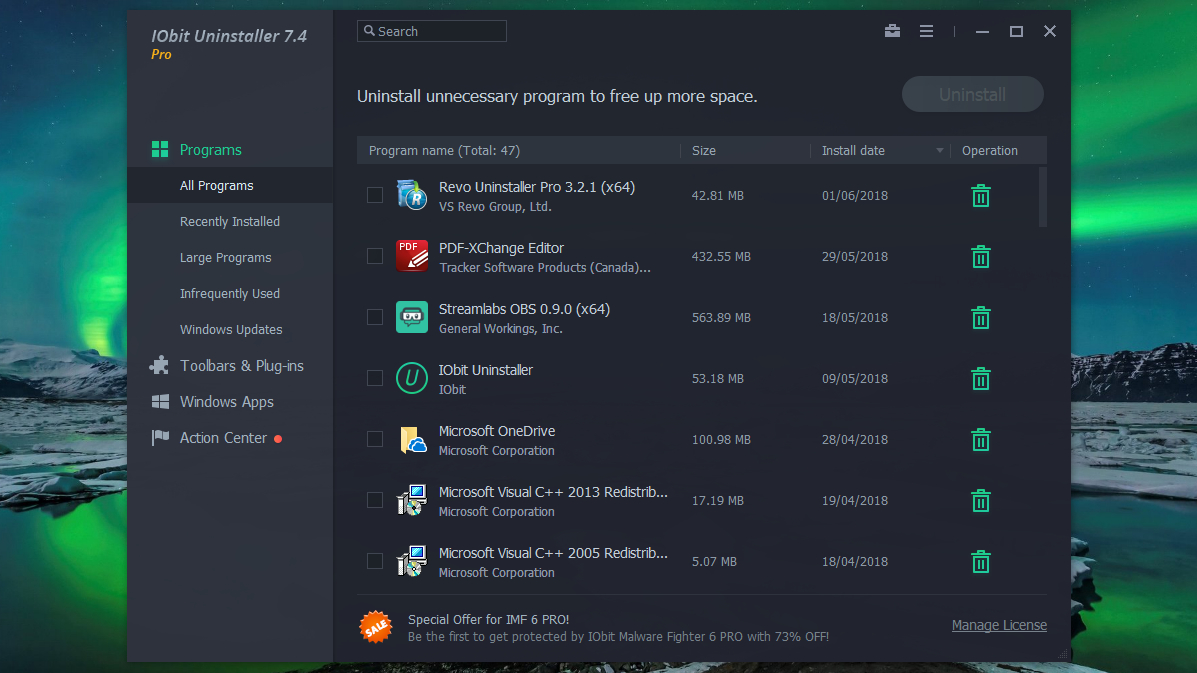 Well designed, with regular updates, but the lack of an install monitor is a pity

IObit Uninstaller is an excellent software remover – well designed and easy to navigate. It uninstalls programs in batches and cleans up residual files automatically. It can't always stop programs from throwing up their own requests and opening web pages in your browser, but few uninstallers can.

IObit Uninstaller also benefits from regular upgrades. Not only does IObit issue regular bug fixes, database updates and new features, it also updates its software in response to major news stories that present a cause for concern (like recently discovered threats, for example).

It can remove toolbars and plugins (including ones you didn’t realize had been installed) and has a dedicated page for removing Windows’ own apps.

IObit's main downside is that, unlike Revo Uninstaller, it’s not able to track new programs as they’re installed. It also contains some prompts to try IObit’s other programs, which is a bit cheeky when you’ve paid for a premium license. It also lacks a tool for monitoring new downloads, which is a shame. 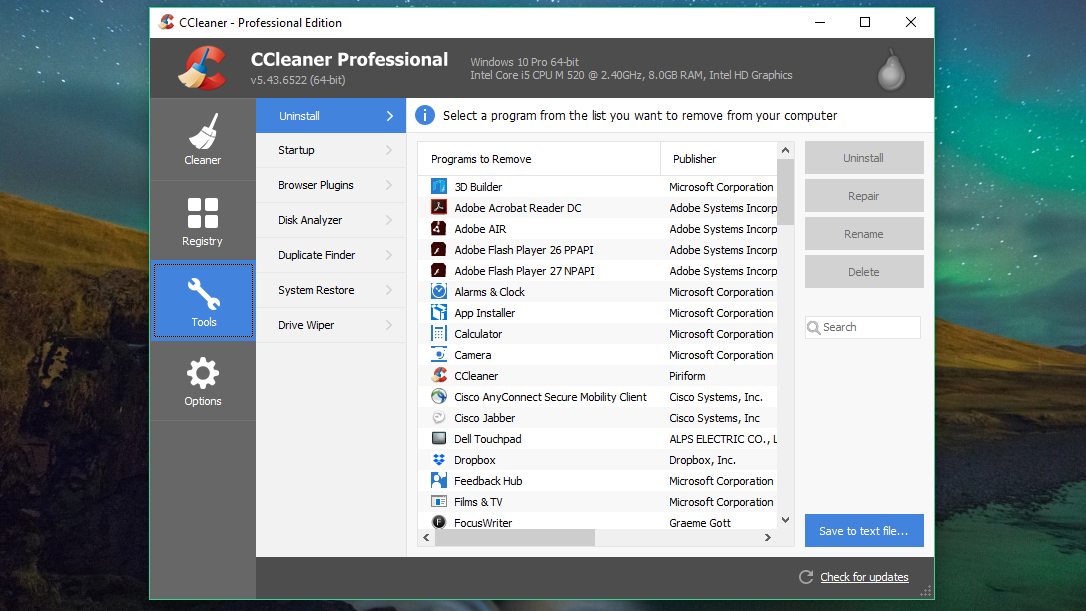 It's best known as a PC optimization tool, but CCleaner Professional is also a great option if you're in need of a software uninstaller. As a bonus, its standard cleanup scan will sweep up the remains of any old programs that haven't uninstalled fully.

First, note that when you've downloaded CCleaner Professional, you'll be offered the opportunity to install Avast Free Antivirus. It’s marked quite clearly, but the box is checked by default so you’ll want to deselect it if you’re already happy with your existing virus protection.

When you launch CCleaner, you'll find that the uninstaller is tucked under the Tools menu, but don’t let that put you off – it’s as effective as many standalone uninstallers. It also lists all of Windows’ own pre-installed apps (though bear in mind that Windows might ‘helpfully’ reinstall them for you next time it performs an update). Unfortunately there's no batch uninstall option; you have to select and remove one program at a time.

Selecting ‘Uninstall’ will only run the program’s own uninstaller – there’s no force uninstall option – but CCleaner’s main function is to mop up leftover files and registry entries, you can quickly check for and remove any remaining junk, or let CCleaner remove it all later in a regular scheduled scan. It’s not as convenient as a dedicated uninstaller that will scan for remnants automatically, but it’s still effective – and it has the advantage of cleaning other junk from your PC at the same time.