Epic’s creation of its own digital storefront have once again sparked contention that the PC gaming is too fragmented, with the surfeit of digital platforms required to play different games denying us the satisfaction of keeping everything in one tidy place.

The reality is that probably about 90% of the average gamer’s collection is on Steam, and it wouldn’t hurt to explore some of the alternatives.

At a time when Epic seems to be getting all the attention, we’ve decided to shine a light on six other PC gaming platforms that are worth checking out, in our list of the best Steam alternatives of 2019.

Probably the most famous (or infamous, depending on how you feel about EA) Steam alternative, Origin has come a long way over the years, growing from something of a necessary evil to play Battlefield and FIFA to a well-polished platform in its own right.

Origin’s clean and elegant, and makes it easy to party up with friends for online gaming. It’s largely centred around EA games, of course, and it’s telling that many of the menus try to guide you towards the big EA IPs like The Sims, FIFA and Battlefield.

Beyond the shameless self-promotion however, you’ll find plenty of non-EA games like the Assassin’s Creed series, The Witcher 3, the Batman series, as well as some vintage titles like Theme Hospital and SimCity 2000.

Given the choice, we’d probably still opt for a Steam version of a game over an Origin one, but one feature that does make Origin pop is the Origin Access subscription.

On the subscription service front, Origin is pretty much unrivalled. 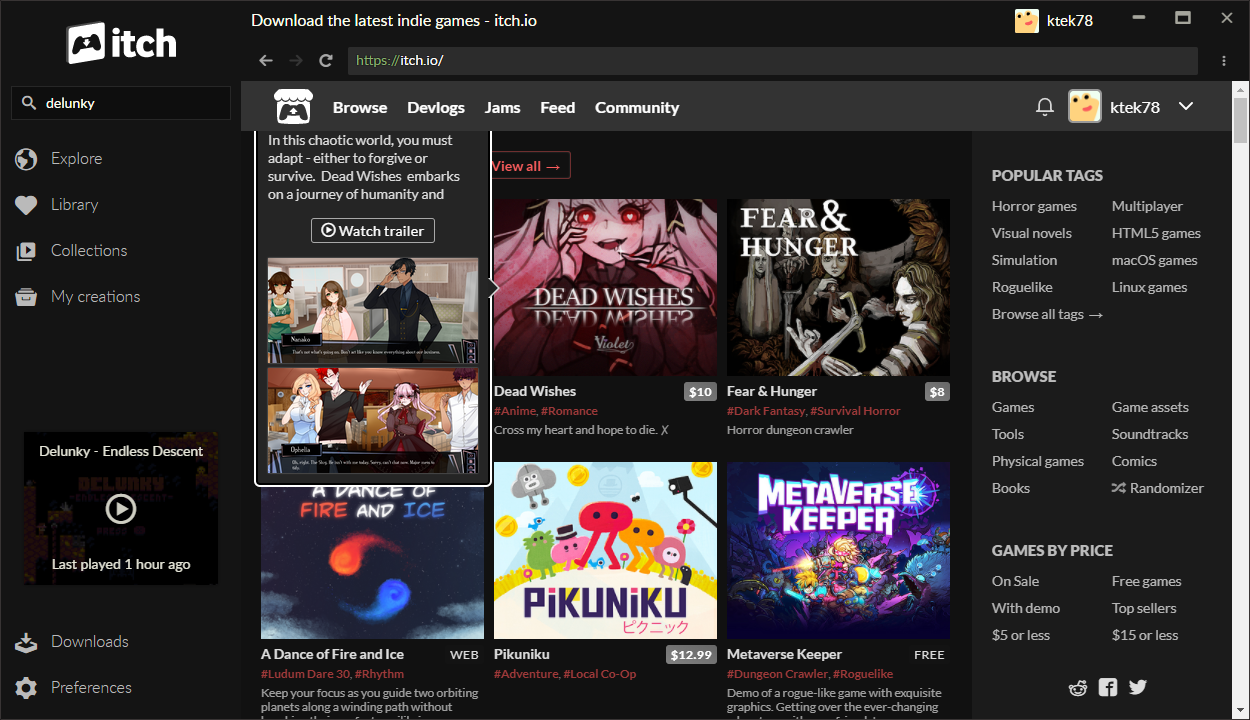 The independent PC gaming platform, equivalent to the eccentric bric-a-brac shop selling obscurities from stuffed animals to crystal skulls. Itch.io is exclusively committed to indie games, and there’s a good chance that some of your favourite indie titles on Steam actually started life on Itch.io before growing to become fully-fledged commercial products. This makes it one of the best and most interesting Steam alternatives out there.

What’s nice about Itch.io is that it puts you right on the frontline of indie game development, helping devs along the tough road to success. Many games here are free at first, relying on feedback and donations before going commercial.

There are tens of thousands of games to peruse, many of which were conceived in one of the many game jams organised by Itch.

The app works smoothly and keeps your games updated. It has a strong community focus, with plenty of discussions, devlogs, and a schedule of the endless gamejams where aspiring developers can jump in and make games in tight time periods.

This really is a Steam alternative that deserves your support. 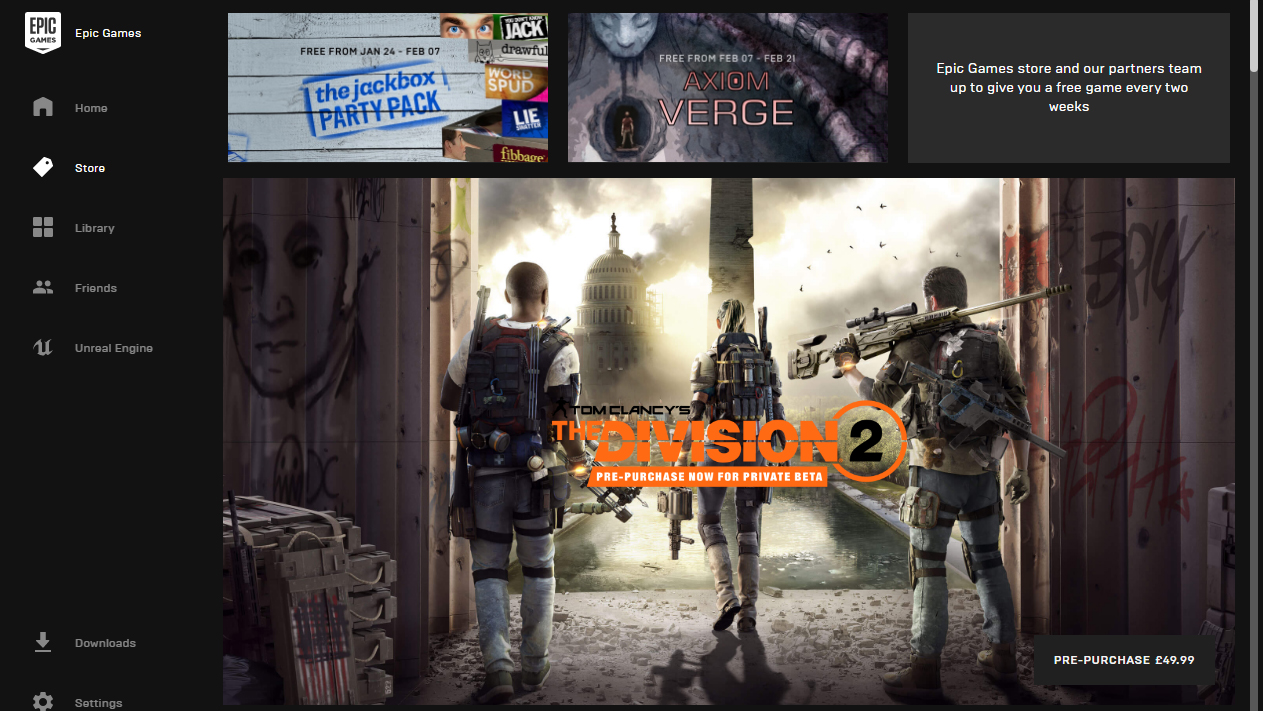 The new kid in town, though maybe ‘kid’ isn’t the right term for a veteran publisher that’s delivered us Unreal, the Unreal Engine and, lest we forget, Fortnite.

Hoping to harness the millions of people who use the Epic Launcher to play Fortnite, Epic has gone in hard on securing exclusivity deals for games ranging from anticipated indie titles like Hades, to big-money behemoths like Metro Exodus.

The Epic Games Store even nabbed the beloved Sony-published PlayStation exclusive Journey, which just goes to show that even exclusivity can evaporate in the face of big money (can we have Bloodborne next, please?).

As we’ve already noted in our Epic Games Store vs Steam feature, the Epic Store doesn’t feel great to use yet, lacking in even basic features like cloud saves and a search bar.

It is, however, the only digital platform with the audacity to secure exclusives like it were the Xbox 360 circa 2008. That, and the fact that it’s currently offering a very good game for free every two weeks, means that by brute financial force it’s worth taking a look at. 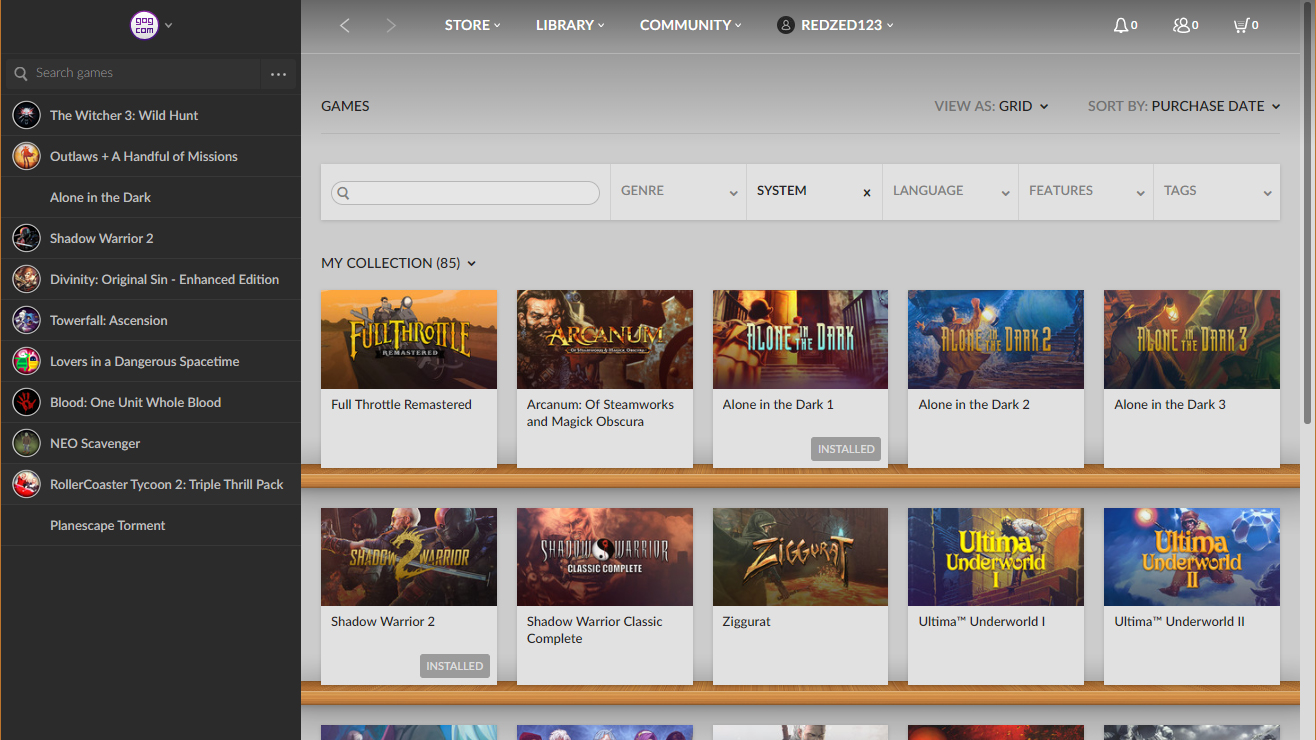 One of the longest-running Steam alternatives has made it this far thanks to one particularly powerful selling point: everything you buy on GOG is DRM-free.

So your games are well and truly yours; you can burn them to discs, you can keep their installers on external hard drives, you can do whatever you like with them. GOG has regular free game giveaways, and sometimes even runs a scheme where you can link your Steam account and get DRM-free versions of your Steam games at no extra cost.

Initially dedicated to reviving old games and making them work on modern PCs, GOG has come a long way, and today you’ll find DRM-free versions of top titles like The Witcher 3, Divinity: Original Sin 2 and No Man’s Sky, among many others.

GOG Galaxy is GOG’s desktop client, first released a couple of years ago. It essentially gives the scrappy DRM-free experience a platform, with all the bells and whistles like friends lists, cloud saves and automatic updates for your games. It’s convenient for library management and shopping, and even stores your owned games on virtual wooden bookshelves. 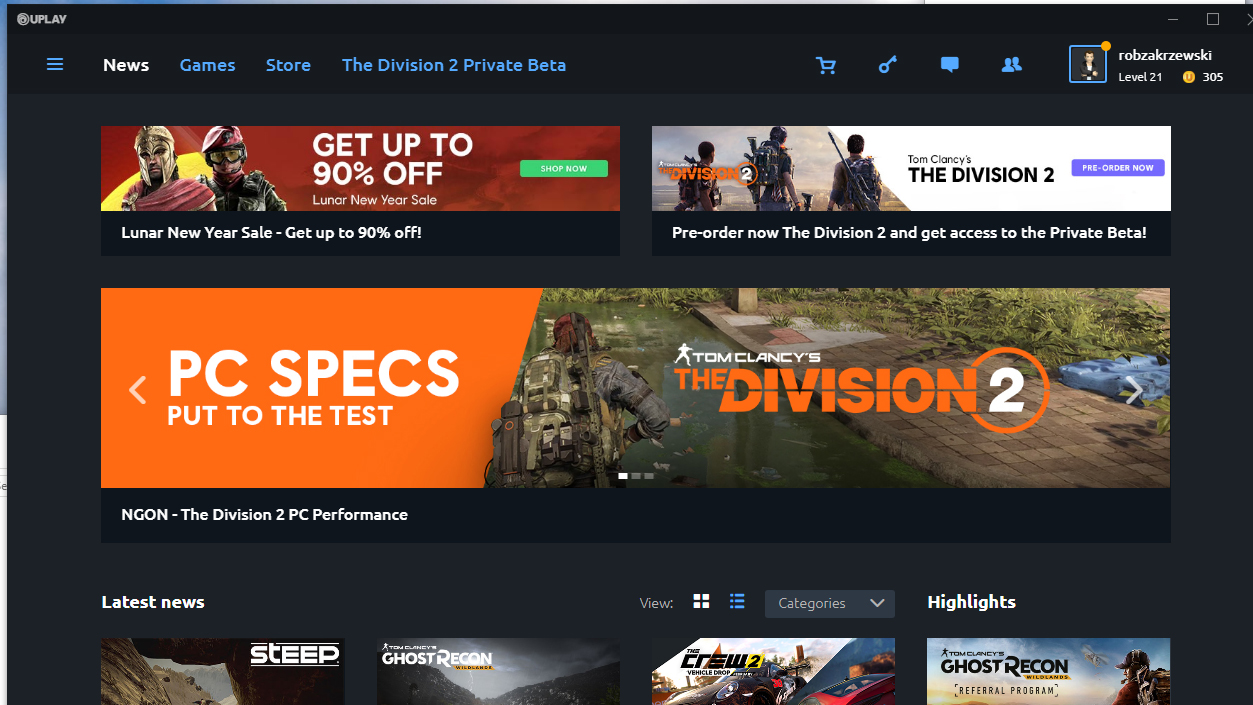 Ubisoft’s official desktop gaming client and store doesn’t have the best reputation. One of its more notorious traits is that even if you buy the Steam version of an Ubisoft game, you still have to run it through Uplay. Basically, it’s Double DRM and it’s not great (so if picking between the Steam and Uplay version of a game, you may as well just pick Uplay to avoid this situation).

Uplay is a functional rather than flashy app, with the usual features you’d hope for such as cloud saves, library and store search functions, and a friends list. You can earn ‘XP’ by playing games through Uplay, but rewards are limited to badges and bragging rights among your friends – nothing more.

Its greatest strength is probably the actual store, which isn’t expansive but of course contains Ubisoft’s impressive repertoire of games from series like Far Cry, Assassin’s Creed, Tom Clancy games and Watch Dogs.

Uplay tends to offer some of the best discounts on its own games, and is known for offering plenty of freebies too, with games like Assassin’s Creed 3, Far Cry: Blood Dragon and For Honor given away in limited-time deals in the past. 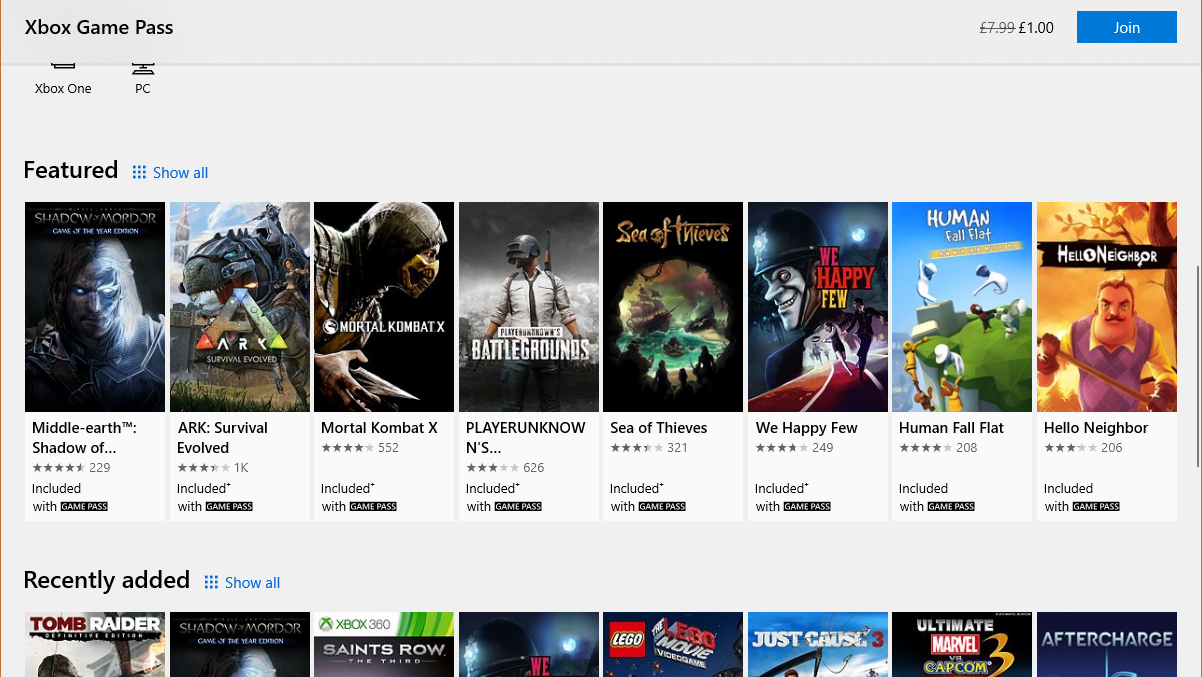 It’s no secret that Microsoft has always harboured ambitions of becoming the leading digital distribution platform on Windows. The problem is that during the years when Microsoft was embroiled in the Xbox and Xbox 360, Steam came along and pretty much took over the PC gaming market unopposed. That, and the fact that first Games for Windows Live, and later the Microsoft Store, were pretty awful for gaming.

But Microsoft has learned from its mistakes. Today, one of the star features of the Microsoft Store is Xbox Play Anywhere, whereby many games you buy for the Xbox One can be played on PC, and vice versa.

Essentially, buying the Xbox or PC version of top games like Forza Horizon 4, Sea of Thieves and Gears of War 4 gets you a copy of the game for both platforms.

Another feature that complements Play Anywhere is the Xbox Game Pass, which lets you download and play a number of the latest first-party Microsoft games, including those mentioned above. Microsoft said it will expand Xbox Game Pass on PC to include all the third-party offerings available on the Xbox One version of the subscription (that’s over 200 games currently), though we’re yet to get confirmation about when this will happen.