Home Uncategorized YouTube TV: Everything you need to know about the TV streaming service YouTube TV: Everything you need to know about the TV streaming service

YouTube TV is available now to everyone in the United States, from Los Angeles to New York City, and it's a brought an absolute reckoning for mainstream cable providers – you know, those guys who hose us with equipment rental fees and HD service when those things should just be free of charge.

For far too long, cable contracts have penalized us if we so much as look at another cable option while bundles pack in things we don't use (cough, home phones) and channels we don't watch all so cable companies can maintain their bottom line.

Well, bad news cable companies: Those days are over.

YouTube TV is a cable replacement, full stop, offering live TV to your phone, tablet and streaming device without a costly cable subscription and contract.

It's a deal that feels too good to be true for those of us and while it has some problems of its own, it could one day put cable companies out of business.

While cable-cutters are definitely on YouTube's radar, it's the so-called cord-nevers out there – those of us who have never paid for cable, and likely never will – that YouTube TV really speaks to. It's all the channels we've come to expect from our parent's house, but at a price we can actually afford.

Are you ready to cancel cable once and for all? Are you ready for dozens of channels streaming live wherever you are without the need for a cable box? If so, then pull up a seat and we'll give you the 411 on this game-changing new service.

First thing's first, you'll need to sign up for a free trial of the service. Once that's done, you can either tune in on your browser (tv.youtube.com) or find the YouTube TV app on your iOS and Android phone or tablet.

If you're looking for the old-school sit back experience, YouTube TV is available on Chromecast and Apple TV compatible by casting from your aforementioned phone and tablet or, if you're the proud owner of an Android TV and/or Roku device, you can find a dedicated app for YouTube TV on their respective channel stores.

Now, it's also worth pointing out that to access YouTube TV, not only are you going to need a subscription to the service but also an internet service plan from one of your local ISPs (for most folks, that's AT&T, Spectrum, Verizon).

This is something most folks pay for already and therefore hasn't been figured into the cost of YouTube TV – but it's worth noting nonetheless.

Why is YouTube TV going to be big? Well, while PlayStation Vue and Sling TV had to carve out a new audience for their products, YouTube TV already has one – one billion users that live in 88 countries and speak 76 different languages.

So far, that massive user base, combined with the YouTube brand – plus the offer of a contract-free cable experience – has attracted a lot of customers, some 800,000 at last count in July 2018.

While YouTube TV isn't the most popular live TV streaming service in the country – an honor that belongs to Sling TV with its 2.4 million subscribers and followed closely by DirecTV Now – it's growing quickly thanks to its better DVR support.

And, should the service ever make its way to the UK where folks watch around 180m hours a day – a number that, according to The Guardian, is growing 45% year on year – it could spell big trouble for traditional service providers.

OK, so YouTube TV is going to be big, you get that. But what exactly is YouTube TV and why should you care? Let’s talk about it.

YouTube TV is a US-exclusive live TV streaming service – think Netflix but instead of on-demand TV shows and movies you’ll see cable channels like ABC, NBC, FOX, ESPN and Disney among many, many more. It’s like cable in the sense that everything is divided by channel and, yes, you’ll have to pay a monthly fee for it, but the difference here is that you’ll be able to take shows whenever and wherever you go.

Loading up the service for the first time, we were recommended shows like Archer, The Big Bang Theory, The Simpsons and many more. We easily found enough content to keep us entertained for the time-being, plus will have plenty to watch next time we log-on thanks to YouTube TV's stellar Cloud DVR.

Cloud DVR, if you've never heard that term before, allows you to record your favorite shows as they air and save them, well, to the cloud so that you can watch them later. It’s TiVo, but everything’s online.

YouTube TV promises unlimited storage for shows for up to nine months – a serious advantage over the competition which usually only offer 28 days of storage.

If you think you're going to just jump past the advertisements, though, think again. Like traditional cable, YouTube TV and its line-up of channels still need revenue beyond your month-to-month subscription fee – and advertisements, as much as we despise them, are YouTube's way of keeping the lights on.

But your monthly subscription isn't without its benefits – YouTube says that its service will allow up to six people in the family to access the service and will allow up to three of them tune into the service simultaneously on the same account – a big advantage when you’re looking to replace cable and you have a big family.

The other thing you need to know about YouTube TV is its price: $40 a month. For comparison, that’s slightly more expensive than Sling TV’s basic $20-per-month package and a few dollars less than PlayStation Vue’s basic $45 package that includes local stations like CBS, NBC, etc…

At last count, YouTube TV offers over 60 networks, including popular cable networks and on-demand programming available for viewing. That includes ABC, CBS, FOX, NBC and more (which means every NFL game up to and including the Super Bowl, are yours to watch every Sunday) plus all the channels that fall under the umbrella of those companies – i.e. ESPN, CSN, FOX Sports, USA, FX, Disney, E!, Bravo, SyFy, FXX, National Geographic, MSNBC, FOX News, CNBC and more.

Here's the complete picture of every channel so far. 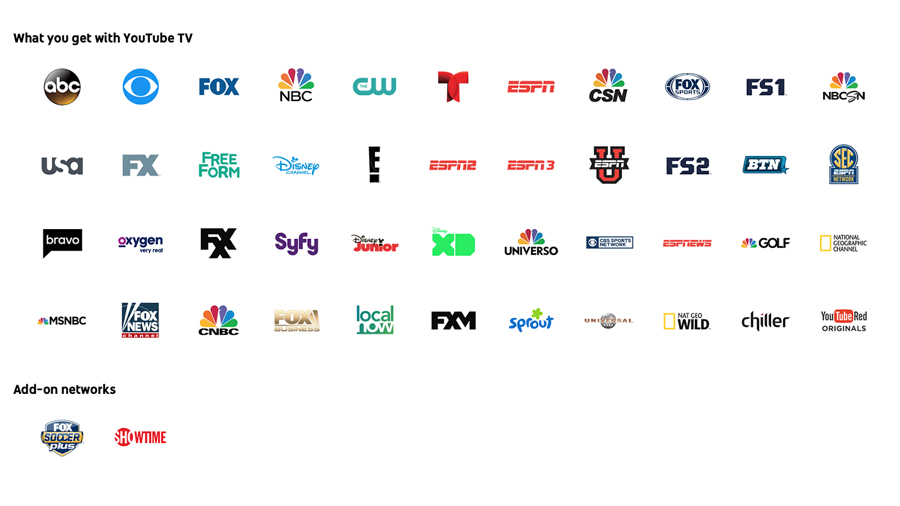 On top of all those channels shown above, you’ll also get access to YouTube’s own network of shows, YouTube Red Originals. Shows on this ‘network’ (a term we use very lightly here) include Scare PewDiePie and exclusive films that you’ve probably never heard of. This really isn’t a huge draw for most people, but hey, maybe the money that comes in from YouTube TV can be used to crank up the quality of this content to near-Netflix levels.

Now, like Amazon Video, you can actually tack on additional premium stations for an extra fee. Right now the list of premium offerings include FOX Soccer Plus and Showtime, which cost around $10 extra per month. 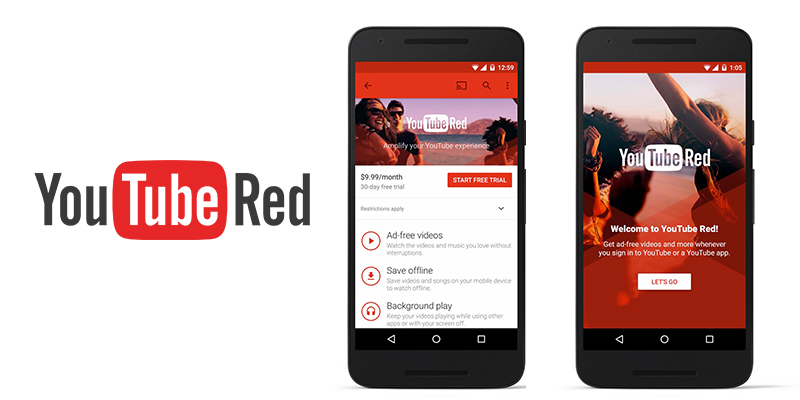 This can be sort of confusing, so listen up. YouTube Premium (what used to be called YouTube Red) is an ad-free version of YouTube that has a few fun features like allowing you to keep a video playing even when your phone is turned off.

Is there some crossover potential here between these two services? Absolutely. Maybe a subscription to YouTube TV also nets you a free subscription to Red. But we'll just have to wait to find out more from YouTube if that's the case.

That’s a good question. The answer here is ‘maybe’. Depending on how your cable service provider packages its internet and cable bundles. If you’re already paying for internet service, you can tack on an extra $40 for YouTube TV and maybe a $10-per-month subscription to Netflix and have just as much content as you’d have from a cable TV service that can cost upwards of $120 to $150 a month.

That being said, if you’re paying for one of those bundles that allows you to package cable, internet and phone service together for a lower price, YouTube TV might not come out to be significantly less.

The benefits of going for a streaming service over a cable service are the ability to watch shows wherever you go, the potential to use Cloud DVR to save shows for later and the no-obligations contract that allows you to cancel your account without a termination fee. On top of everything else, you don’t need to rent a cable box from companies like Comcast, Spectrum or AT&T, because the streaming service comes in through whatever device you’re using.

In short, YouTube TV can offer as many channels as basic cable does, without the need for a cable box and 12-month contract, which is why we consider it a win. It does all that and offers Cloud DVR, is available a plethora of apps for devices like Apple TV and the Xbox One family of consoles and does video-on-demand, making it one of the best streaming services on the planet.

It'd be nice if there were even more channels thrown in there, but as it stands, this is probably the best TV streaming service in the US right now, and well-worth its monthly fee for the majority of folks out there.

How soon can you start watching it? Right now. Just head over to tv.youtube.com to start your free trial.